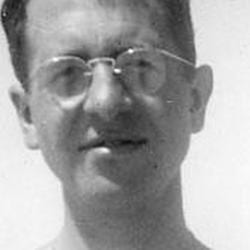 Musical Compositions:  Toccata and Fugue in F, performed at the Institute of Musical Art, 1920; Nocturne for String Quartet, performed by the Cleveland Institute of Music Quartet, 1922; Sonata for violin and piano, performed by Samuel Dushkin and Marcel Ciampi, Paris, 1924, at a League of Composers Concert, 1927 and 1930, second movement, by Fredell Lack and the composer, 1943; J’ai cherché trente ans mes soeurs, sung by Ada MacLeish, 1925; These, my Ophelia, song, performed at a League of Composers Concert, 1927, at the Yaddo Festival, 1933, at the High Low Concerts, 1934, by Janet Fairbank, 1943; Mass, for women’s voices with organ accompaniment, sung at the Church of the Blessed Sacrament, Geneseo, New York, 1931; Eight Epitaphs, sung by Hugues Cuenod, 1937, by Roland Hayes, 1938—, by Benjamin de Loache, 1939 and 1941, by Vera Bryner, 1943; Seven Recreations, for women’s voices, oboe, violin, viola, ‘cello and piano, performed at the Dalcroze School, New York City, 1939; Four Rhymes, sung by Dorothy Maynor, 1941, by Vera Bryner, 1943; Toccata for piano, performed by John Kirkpatrick, 1941; The Doves, sung by Cleora Wood, 1942, by Vera Vryner, 1943; Pas de trois, ballet, performed with the composer at the piano, at the Russian War Relief Concert, New York City, 1942; For Ann Gregory for a capella chorus, performed at the Three Choir Festival at Temple Emanu-El, New York City, 1942; Memory and The Children, sung by Janet Fairbank, 1943; Prelude and Fugue in D, performed by John Kirkpatrick, 1943; “The Second Joyful Mystery,” fugue for two pianos, performed by Ethel Bartlett and Rae Robertson, 1943, by Nadia Boulanger and the composer, 1943, and by Nadia Boulanger and Robert Tangeman, 1943.