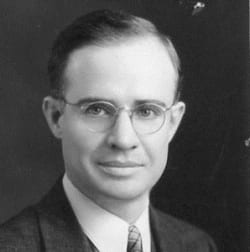 As published in the Foundation’s Report for 1935–36:
(Profile photograph: Peterson's Studio, Columbia, Missouri)

BRADY, THOMAS ALLAN:  Appointed for a study, chiefly in Italy, Greece and Egypt, of the sculpture and figured monuments relating to the cult of the Egyptian gods in Hellenistic and Roman periods; also studies of the remains of temples of those deities which have been excavated in Italy and the Aegean area; tenure, twelve months from August 1, 1936.