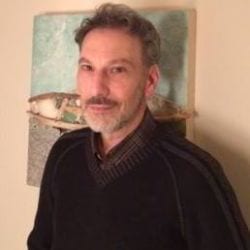 Thomas Centolella is the author of four collections of poetry. Terra Firma, Lights & Mysteries, and Views from along the Middle Way were published by Copper Canyon Press. His most recent book, Almost Human, won the Dorset Prize from Tupelo Press, selected by Edward Hirsch. His other honors include the Lannan Literary Award, a Lannan Foundation Residency, the American Book Award, the California Book Award, the Northern California Book Award, and publication in the National Poetry Series (selected by Denise Levertov).

Centolella’s poems have been featured in many periodicals, on National Public Radio, and in numerous anthologies, including Don’t Tell Mama!: the Penguin Book of Italian American Writing (Tandem Library); Learning by Heart: Contemporary American Poetry about School (University of Iowa Press); and America, We Call Your Name: Poems of Resistance and Resilience (Sixteen Rivers Press).

A former Stegner Fellow at Stanford University, Centolella has been teaching creative writing in the San Francisco Bay Area since 1986. His instruction has reached across the social spectrum: students K-12 in the California Poetry in the Schools Program; at-risk teenagers at WritersCorps; undergraduate and graduate students at San Francisco State University; continuing education students at UC Berkeley Extension and College of Marin; and seniors dealing with Alzheimer’s and other dementia at the Institute on Aging in San Francisco. He also has been a visiting writer at many colleges and universities in the U.S. and abroad. He currently teaches at College of Marin, at the Redwoods Retirement Community in Mill Valley, CA., and in private workshops.

Regarding Centolella’s latest book, Pulitzer Prize winner Carl Dennis had this to say: “Thomas Centolella's Almost Human has an arresting, original voice, distinctive in its being both elusive and direct. On the one hand it can be riddling and elliptical, the voice of someone who possesses the ‘art of caring from afar.’ On the other it can be startlingly open in expressing the speaker’s concern with finding a vision to live by. The poet can present himself as one of the followers of a remote visionary who seems in need of a vote of confidence, and as a roving prophet of tranquility who has to break off his instructions to the reader so he might go home to ‘acquire some peace’ of his own. The speaker is bracingly honest about the resistance of the world to revelation, and at the same time seems always open to change, so that the simple act of sitting down to play the piano is felt as making contact ‘with everything that has come before/and is still to come.’ Without the hope of salvation, the speaker seems to believe in the possibility of engaging with a reality deeper than any he has yet encountered, regarding his frustrations as part of a ritual of desire that must be continually enacted. The result is a book that keeps drawing the reader back and keeps surprising.”