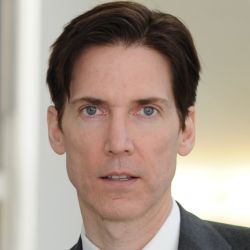 Thomas Healy is a writer and law professor who had long been looking for a way to combine his background in journalism with his scholarship in constitutional law. He found the answer several years ago while researching the early free speech opinions of Supreme Court Justice Oliver Wendell Holmes. Initially a skeptic of free speech, Holmes changed his views on the subject in the months after World War I and wrote a passionate dissenting opinion that laid the foundation for our modern understanding of the First Amendment. Healy had always wondered what prompted Holmes’s conversion, and as he delved into the justice’s life and experiences he discovered a fascinating story that was as much about human relationships as it was about law. The result was Healy’s first book, The Great Dissent: How Oliver Wendell Holmes Changed His Mind – and Changed the History of Free Speech in America (Metropolitan/Henry Holt 2013), which won the Robert F. Kennedy Book Award, the Hugh M. Hefner First Amendment Award, and the New Jersey Council for the Humanities Book Award. It was also selected as a New York Times Book Review editor's choice and was named one of the fifteen best non-fiction books of 2013 by the Christian Science Monitor.

A graduate of Columbia Law School, Healy clerked for Judge Michael Daly Hawkins on the U.S. Court of Appeals and was an associate at Sidley Austin Brown & Wood in Washington D.C., where he worked on several cases before the U.S. Supreme Court. Since 2003, he has been a professor at Seton Hall University School of Law, where he teaches and writes about the Constitution, the federal courts, and freedom of speech.

He began his career as a reporter at The News & Observer in Raleigh, N.C. and later worked as Supreme Court correspondent for the Baltimore Sun. His next book will return him to his roots as he chronicles an attempt by civil rights activists to build a predominantly black city on a former slave plantation in North Carolina during the 1970s.