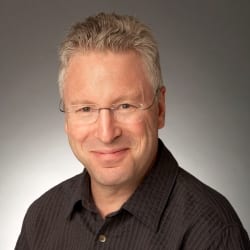 Tom Levenson writes and makes documentary films about science, its history, and the interplay between scientific inquiry and the broader culture and society in which the work takes place. This extremely gratefully received Guggenheim Fellowship will support work on a new book that uses the history of the South Sea Bubble – a watershed event in early-modern capitalism – to explore the connection between the scientific revolution and the emergence of new ideas about money and exchange. A revisionist history, this project aims at both new insights into the scientific revolution as lived, and in the evolution of finance over the last three centuries, with all the wealth and woe thus produced.

Levenson is a professor of science writing at MIT and he directs the Graduate Program in Science Writing there. He has written five books: The Hunt For Vulcan (2015) Newton and the Counterfeiter (2009), Einstein in Berlin (2003), Measure for Measure: A Musical History of Science (1993), and Ice Time: Climate, Science and Life on Earth (1989), with The Hunt For Vulcan forthcoming in 2015.

He began work as a documentarian in 1987, and he has since produced, directed, written, and or executive-produced more than a dozen films on science, mostly for the NOVA series on PBS, among them the Origins mini-series and the two-hour biography Einstein Revealed, both for the NOVA series on PBS. He won the National Academies Science Communication Award, shared a George Foster Peabody Award, and won the AAAS science communication prize, among other honors. His short-form writing has appeared in a wide range of newspapers, magazines and digital publications, and he is currently an Ideas columnist for The Boston Globe.

Levenson earned his BA in East Asian Studies from Harvard University, and now lives in the Boston area with his wife, son and semi-feral cat.