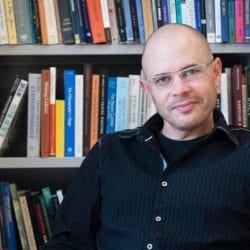 I am a professor of Music and Africana Studies at the University of Pennsylvania, where I’ve taught since receiving my Ph.D. from the University of Chicago in 2002. My research focuses on musical life in the Anglophone Caribbean. The projects I have embraced over the years explore quite disparate topics and focus on radically different spaces within the Caribbean, and yet, the overarching theme that ties all of my work together is the notion of peripheries. I work in very small places, in communities that are often peripheral to the concerns of the nation-state and the region, and with musical genres that, on the face of it, seem peripheral to the musics most readily identified with the Caribbean. I have chosen to focus on peripheries because of my deep conviction that the very notion of centers and peripheries needs to be recalibrated, rethought, and problematized; I think with popular music because it provides a particularly good lens through which to focus attention on such tasks. I’ve worked on music and religion in Trinidad and Tobago, researched music and tourism in The Bahamas, and, with Guggenheim support, I am currently completing a book concerned with creole musics in the Commonwealth of Dominica.

This project, entitled Sounding a Borderless Caribbean: The Creole Geographies of Dominican Popular Music (under contract at the University of Chicago Press), has been occupying most of my research energy for the past three or four years. This project investigates the notion of creole music in the micro-state of Dominica, where peripheral concerns are even more pronounced than in any of my previous projects. Dominica, a nation of only 73,000 citizens, is: English-speaking in a French Caribbean neighborhood (situated between Guadeloupe and Martinique); constantly confused with the Dominican Republic; and marginal in economic terms, possessing neither a thriving tourism industry nor a viable export economy. A survey of scholarship, too, reveals its peripherality—its population speaks the wrong language to attract Francophone scholars, and it is located in the wrong neighborhood to draw the attention of Anglophone scholars. As such, it has been largely neglected in the literature.

In spite of this peripheral standing within the region and in scholarship, however, Dominica has produced very important musical genres (including cadence-lypso and bouyon) that continue to affect the musical life of the entire region. And one way that Dominicans describe their musical approach is to characterize it as creole. The vocabulary of creole/creolization/creolité has, in recent years been supplanted by ideas such as hybridity, transnationalism, and post/de/coloniality, but I am convinced that attending to and rethinking the multiple meanings of “creole” will generate important insights into the formation of popular musics in Dominica and across the Caribbean. It may also open new possibilities for rethinking peripheral spaces, in that a claim to creole-ness places Dominicans in direct relation to the entire Caribbean and beyond—a fact not lost on the organizers of the country’s major music festival, entitled the World Creole Music Festival.