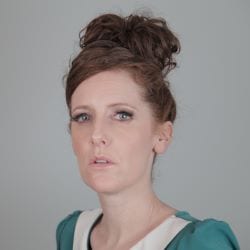 Tina Satter is an Obie-winning writer and director for theater and film, described as a “visually exacting stage artist…with a taste for acidic eye candy and erotic enigmas” (New York Times). She is Artistic Director of the company Half Straddle where she's written and directed 10 plays presented in the United States and abroad. Most recently she had her Off Broadway debut as conceiver and director of Is This A Room at the Vineyard Theatre. She's created and directed music videos and shorter performance pieces, and curated and designed a colloquy of formal lectures by artists, curators, and critics at The Kitchen called Here I Go, pt. 2 of You. Tina is a recipient of a Pew Fellowship in 2019, Foundation for Contemporary Arts Award in 2016, and Doris Duke Impact Award in 2014. Tina attended the graduate playwriting program at Brooklyn College, received an M.A. from Reed College, and a B.A. from Bowdoin College. Her play collection Seagull (Thinking of you) was published by 53rd State Press, who also published the text and vinyl edition of Ghost Rings. She regularly teaches and leads workshops on writing and directing. Born in N.H, Tina now lives in New York City. Photo Credit: Michael De Angelis