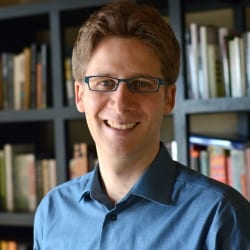 Tom Griffiths is a Professor of Psychology and Cognitive Science at the University of California, Berkeley, where he is also the Director of the Institute of Cognitive and Brain Sciences. His research explores connections between human and machine learning, using ideas from statistics and artificial intelligence to understand how people solve the challenging computational problems they encounter in everyday life. Tom completed his PhD in Psychology at Stanford University in 2005, and taught at Brown University before moving to Berkeley. He has received early career awards for his research from the National Science Foundation, the Sloan Foundation, the Society for Mathematical Psychology, the Society for Experimental Psychology, the Association for Psychological Science, and the American Psychological Association. In 2016, Tom and his friend and collaborator Brian Christian published _Algorithms to live by_, introducing ideas from computer science and cognitive science to a general audience and illustrating how they can be applied to human decision-making. The book was named as one of the Amazon.com “Best Science Books of 2016,” the Forbes “Must-read brain books of 2016,” and the MIT Technology Review “Best books of 2016.”