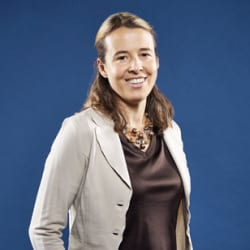 One of the top financial scholars under the age of 40, Ulrike Malmendier won the prestigious Fischer Black Prize from the American Finance Association in 2013, which noted the originality and creativity of her research in corporate finance, behavioral economics and finance, contract theory, and the history of the firm. She has been teaching at UC Berkeley since 2006 and has been a Professor of Finance at Berkeley’s Haas School of Business since 2010.

Malmendier’s research lies in the intersection of economics and finance, and specifically how individuals make mistakes and systematically biased decisions. Her work includes research on CEO overconfidence, the long-term frugality of “Depression babies”, and the decision-making behind gym membership. She has recently been interested in the impact of economic shocks, such as high inflation or unemployment, on later economic behavior of individuals who lived through these periods.

Malmendier was inducted to the American Academy of Arts and Sciences in 2016. Her numerous honors and prizes include the Alfred P. Sloan Research Fellowship and the Bessel Prize of the Alexander von Humboldt Foundation. Her research has been honored several times with the Citation of Excellence by Emerald Management Reviews, including for her work on CEO overconfidence and financial expertise of directors. She also received the Fordham/NYU “Rising Star in Finance” award in 2012. She currently serves on the board of the American Finance Association and is a founding board member of AFFECT, the AFA’s American Female Finance Committee, and she is frequently asked to give keynote addresses.

Malmendier holds joint professorships in economics and business at Berkeley, where she is the founding co-chair of the Initiative in Behavioral Finance and Economics. Prior to UC Berkeley, she was an Assistant Professor of Finance at the Stanford Graduate School of Business and had visiting positions at Princeton University, Chicago Booth School of Business. In addition to teaching, she has conducted extensive research for the National Bureau of Economic Research (NBER), Centre for Economic Policy Research (CEPR), Institute for the Study of Labor (IZA) and CESifo (Center for Economic Studies ifo Institute) in Germany. She is a founder and co-organizer of BEAM and SITE Psychology & Economics, the leading conferences in Behavioral Economics. Malmendier received her PhD in Business Economics from Harvard University in 2002, and her PhD in Law from the University of Bonn in 2000.