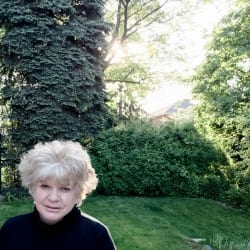 Victoria Nelson has explored a range of writing genres including fiction and memoir, scholarship, literary criticism, and dramatic writing.

A deep interest in Eastern European literature of the fantastic, particularly works by the between-wars Polish writers Bruno Schulz and Witold Gombrowicz, led her to write about both these authors; she selected the essays and co-translated the English edition of Schulz’s Letters, Drawings and Selected Prose. Nelson has published two volumes of short fiction, Wild California and A Bestiary of My Heart, and a study of creative resistance, On Writer’s Block, that was a Book of the Month Club alternate in its second edition. A formative decade in the Hawaiian Islands produced the memoir My Time in Hawaii.

A series of essays attempting to answer a question about ghost and horror tales, “Why scary monsters? Why is the nonmaterial always presented as evil in the Western supernatural?” became The Secret Life of Puppets, tracing the journey of the supernatural grotesque from Late Antiquity through the Protestant Reformation up to the turn of the 21st century. This book, published by Harvard University Press, won the Modern Language Association’s Scaglione Prize in Comparative Literary Studies in 2002.

Its sequel, Gothicka, supported by an ACLS fellowship, investigated the same theme of the “repressed transcendental” in the great refulgence of the Gothic in early 21st century popular culture, focusing on fan-based new religious groups and their use of works such as The Lord of the Rings and the Twilight series as scripture for their spiritual practices. Gothicka won the Association of American Publishers’ 2012 PROSE award for Professional and Scholarly Excellence in Literature. The last book in this trilogy, devoted to a deeper exploration of allegory old and new, will be Nelson’s Guggenheim project.

Her current movie projects include a feature film production of Geoffrey Household’s iconic thriller Rogue Male and a spec script based on James Hogg’s Private Memoirs and Confessions of a Justified Sinner. She has also adapted the Balzac novel Séraphita for the stage.

Nelson has taught and lectured in academic and public venues in the United States, the United Kingdom, and Europe. She currently teaches in the Goddard College MFAW program and is occasional senior lecturer in the University of California, Berkeley Rhetoric Department.