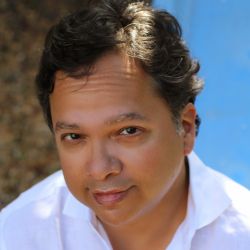 Vikram Chandra’s first novel, Red Earth and Pouring Rain, was published in 1995. The book won the Commonwealth Writers Prize for Best First Book and the David Higham Prize for Fiction.

Sacred Games, a novel, was published in 2006. The book was awarded the Hutch Crossword Prize for Fiction in English (the “Indian Booker”) for 2006; it was also the winner of a 2007 Salon Book Award and was a finalist for the National Book Critics Circle Award for Fiction. Sacred Games was included in numerous annual lists including “Books of the Year,” The Independent (UK); “Books of the Year,” Financial Times (UK); “10 Best Asian Books of 2006,” Time (Asia Edition); “Best Fiction of 2006,” Guardian (USA); “The Fiction List for 2006,” Bloomberg.com (USA).

A non-fiction book titled Mirrored Mind: My Life in Letters and Code was published in 2013 by Penguin India; the same book was published as Geek Sublime: Writing Fiction, Coding Software by Faber & Faber in the UK (2014) and as Geek Sublime: The Beauty of Code, The Code of Beauty by Graywolf in the USA (2014). Mirrored Mind/Geek Sublime was selected as an Editors’ Choice book by The New York Times Book Review and as one of the Best Books of 2014 by The Telegraph (UK). It was one of the finalists for the National Book Critics Circle award in the criticism category.

Chandra has published in the Paris Review and the New Yorker. His work has been translated into nineteen languages. He teaches creative writing at the University of California, Berkeley.