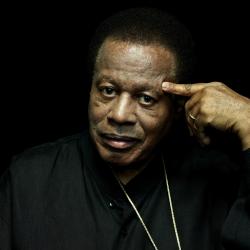 The music of Wayne Shorter has left an indelible mark on the development of music for the last half-century. He first rose to prominence in the late 1950’s as the primary composer for Art Blakey’s Jazz Messengers. He next joined the Miles Davis Quintet becoming what that bandleader referred to as the ensemble’s “intellectual musical catalyst” before co-founding the pioneering group Weather Report. Since 2001, he has led his own highly acclaimed quartet.

“Mr. Shorter’s mastery is in knocking down the wall between jazz and classical” (New York Times) and the Chicago Symphony, Lyon Symphony, Orpheus Chamber Orchestra, Prague Philharmonic and Royal Concertgebouw Orchestra are among the orchestras that have performed his symphonic compositions. Acclaimed artists and ensembles such as Renée Fleming and the Imani Winds have also performed his works. He has received commissions from the St. Louis, Nashville, Detroit and National Symphony Orchestras, the Los Angeles Philharmonic and the La Jolla Music Society. In all, Mr. Shorter has realized over 200 compositions, works that are performed around the world by premiere artists and studied by students and scholars alike.

In his current symphonic work, Mr. Shorter continues to evolve the dynamic between fully realized score and improvisation creating, in his words, a "flashlight into the unknown”. “I want the audience to feel what might be necessary in order to continue this life in a way that has never been done before.” says Mr. Shorter, “so that we can have a new way of dialoguing based on being free of comfort zones in life and develop the courage to be fearless and not be afraid of the unexpected and the unknown.”

Shorter’s outstanding record of professional achievement includes 10 GRAMMYS including a Lifetime Achievement GRAMMY in 2015. He has received Honorary Doctorates from New York University, New England Conservatory and Berklee College of Music. In 1997, the National Endowment for the Arts presented Shorter with the Jazz Master Award. In 2013 Mr. Shorter received a Lifetime achievement award from the Thelonious Monk Institute of Jazz, becoming only the 2nd person to be so honored in the organization’s 30-year history.

American Academy of Arts and Sciences, 2016