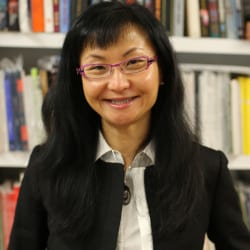 Wendy Hui Kyong Chun’s work investigates connections between the humanities and engineering, critical theory and new media. The desire to work across these seemingly divergent fields began quite young; thus, when she started her bachelor’s degree in Systems Design Engineering at the University of Waterloo, she also intended to study English Literature—a plan that became more concrete after the 1989 Montreal Massacre, in which a gunman separated the men and women in an engineering classroom and began to shoot the women. She turned to the humanities to help her answer questions that couldn’t be answered within her engineering textbooks, eventually receiving a PhD in English from Princeton. In her study of new media and its impact on communication and society, she integrates all elements of her education. She plans on using her fellowship year to analyze the persistence and transformation of categories of race, gender, class, and sexuality in the era of data analytics. This project furthers her exploration of the impact of networks on how we experience and imagine contemporary society, which she began in her trilogy on the emergence of the Internet as a mass personalized medium (Control and Freedom: Power and Paranoia in the Age of Fiber Optics, Programmed Visions: Software and Memory, Exhausting Obsolescence of Updating to Remain the Same: Habitual New Media, all published by MIT Press). Currently, she is Professor and Chair of Modern Culture and Media at Brown University. She has been a Member of the Institute for Advanced Study (Princeton), a fellow at the Radcliffe Institute for Advanced Study at Harvard, and a Wriston Fellow at Brown. She is the Velux Foundation Visiting Professor of Politics, Philosophy and Management at the Copenhagen Business School, and she has been the Wayne Morse Professor for Law and Politics at the University of Oregon, the Gerald LeBoff Visiting Scholar at New York University, Visiting Professor at Leuphana University, and a visiting associate professor in the History of Science Department at Harvard, of which she is now an Associate.