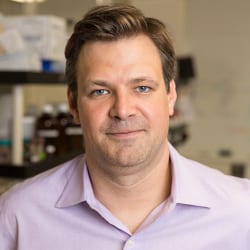 Will Dichtel is the Robert L. Letsinger Professor of Chemistry at Northwestern University. His research group develops new ways to control the structure and properties of organic materials and the interfaces between different materials. He has made major contributions to expanding the concept of polymerization into two and three dimensions, which may someday provide superior materials for separations, water desalination membranes, batteries, and many other applications. He has also developed porous polymers derived from corn that remove organic pollutants, such as pesticides, pharmaceuticals, and endocrine disruptors, from water. In 2016, he co-founded CycloPure, Inc. to commercialize these materials.

Prof. Dichtel was born in Houston, Texas, and was raised in Roanoke, Virginia. He earned his undergraduate and doctoral degrees in chemistry from MIT and UC-Berkeley, respectively, the latter under the mentorship of Prof. Jean M. J. Fréchet. He performed joint postdoctoral research in Los Angeles with Prof. Fraser Stoddart, then at UCLA, and Prof. James Heath at Caltech. Prof. Dichtel joined the faculty of the Department of Chemistry and Chemical Biology at Cornell University in 2008 and moved to Northwestern University in 2016. He was named a MacArthur Fellow in 2015 and was in residence at UC-Berkeley in Spring 2016 as a Visiting Miller Professor. He has received the Leo Hendrik Baekeland Award, the National Fresenius Award from the Phi Lambda Upsilon National Chemistry Honor Society, the Polymer International – IUPAC Award for Creativity in Polymer Science, the Camille Dreyfus Teacher-Scholar Award, the Beckman Young Investigator Award, a Cottrell Scholar Award from Research Corporation, a Sloan Fellowship, and the Arthur C. Cope Scholar Award from the American Chemical Society.

In addition to his research, Prof. Dichtel is passionate about teaching the relevance of organic chemistry to everyday life in his undergraduate courses and is an avid open-water swimmer.