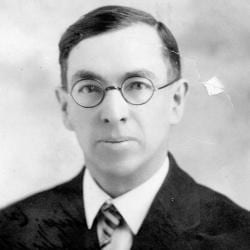 As published in the Foundation’s Report for 1927:

Wilson, William Jerome: Appointed to make a collation of the known manuscripts, and a search trhough the smaller libraries of Italy for further manuscripts, of the religious-philosophical literature passing under the name of Hermes Trismegistos, with a view to the preparation of an edition of the Corpus Hermeticum, and an estimate of its possible influence upon early Christian thought; tenure, twelve months from August 15, 1927.