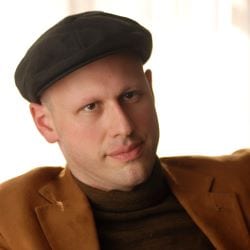 Yevgeniy Sharlat has composed music for orchestra, chamber ensembles, solo, theater, dance, mechanical sculptures, and animations. He has written string quartets for Kronos, Aeolus, Aizuri and Amphion Quartets. His music has been played by such groups as Kremerata Baltica, Seattle Symphony, NOW Ensemble, Hub New Music, Seattle Chamber Players, Quodlibet Ensemble, and many others. He was among the composers commissioned by the Kronos Quartet for its “Fifty for the Future” project. His RIPEFG appeared on Aizuri Quartet's Grammy-nominated album Blueprints and was hailed as “startlingly compelling” by the San Diego Union-Tribune. A piano quartet, commissioned by Astral Artistic Services, was described as “one of the most compelling works to enter the chamber music literature in some time” by the Philadelphia Inquirer. He collaborated with prominent choreographers Lar Lubovitch, Donald Byrd, and Caron Eule, as well as a renowned dancer Lil Buck. Born in Moscow, Russia, Mr. Sharlat came to the United States as a refugee at age 16. Since 2005, he has been on the composition faculty at The University of Texas at Austin.  Video of Spare the Rod! Photo Credit: Fred Hatt