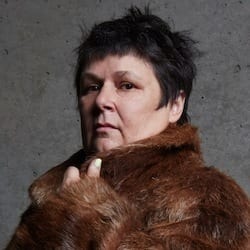 Originally from Zurich, Switzerland, Yvonne Meier was part of a group of dance and performance artists who coalesced around Performance Space 122 (NYC) in 1980. Working alongside and collaborating with Ishmael Houston-Jones, Jennifer Monson, and others, Meier created increasingly audacious new works and collaborations, performing, teaching, and touring internationally in New York, Switzerland, and elsewhere. She has since created countless solos, large-scale evening length group pieces, as well as a deep investigation into the art of improvisation which has resulted in the development of her own technique, “Scores.”

In the late 1980s and early ‘90s, Meier expanded her choreographic practice, based in the somatic techniques of Releasing and Authentic Movement, to embrace performance art strategies with increasingly aggressive and visceral stage effects. Meier’s high-risk movement vocabulary takes performers and audiences through transformation by exhaustion. Her evening length group pieces are wild, anarchic and provocative postmodern spectacles, featuring maze-like installations of hundreds of cardboard refrigerator boxes (The Shining, 1993/2011-12) and collapsible shelves bearing thousands of china dinner plates (Pommes-Fritz, 1991). Her penchant for oversized props and awkward/absurd body-extending costumes creates environments in which performers are exposed to high-speed, complex and eccentric movement scores – demanding total physical commitment and expanding the possibilities of bodily involvement in space. She has developed her signature movement technique, known as “Scores,” beginning in 1993 and continues to teach and refine the practice today. Recent works include reconstructions of Mad Heidi (2007) and The Shining (2011-12), This is Not a Pink Pony (2008/2013), and a return to performing in her own work with Durch Nacht und Nebel (2015).

Meier’s work has received numerous grants and awards from Pro Helvetia, the Franklin Furnace Fund for Performance Art, three Choreography Fellowships from the National Endowment for the Arts, two NEA Inter-Arts Project Grants, three New York Foundation for the Arts Choreography Fellowships, and choreography commissions from the New York State Council for the Arts, Lambent Foundation, and an American Masterpiece Award from the NEA. Meier was awarded New York Dance and Performance (Bessie) Awards for The Shining, Stolen, and her reconstruction The Shining 3, the Brooklyn Arts Exchange (BAX) Performing Artist Award (2015), and was honored at the 2012 Movement Research Gala.

Artist’s Statement
The “Scores” technique I have developed provides dancers with a frame for experiencing and expressing physical urges from the body in relationship to a given task or situation. Spending time grappling with internal imagery, and exploring the nuances of their presence in the body, informs scores and sequences that make up the final work. Working with materials and props in relation to the body is central to my practice: drawing out their innate qualities, objects become bodily extensions and active collaborators at once, lending specific directives and opening up new possibilities to take form. My resulting dances incorporate a range of structured improvisation, set choreography, and tasks, to outlandish and bizarre ends. There is a high element of risk, embraced in the process and carried through to the final work in a raw, unpolished form; the aim is to draw audience into the precariousness and evoke a visceral experience.