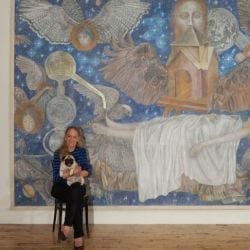 Ann McCoy is a New York-based sculptor and painter whose career began in 1972. She is a working artist as well as an educator and art critic who writes frequently for the Brooklyn Rail. She is a lecturer at Yale in the graduate design division of the Yale School of Drama, where she teaches art history, the history of projection, and mythology. She has written about artists working with projection including William Kentridge, Nalini Malini, Lenore Malen, Carolee Schneemann, and Krzysztof Wodiczko.

She is known primarily for her large-scale pencil drawings, which are based on her dreams, studies in alchemy, and depth psychology. Ann McCoy worked with Prof. C.A. Meier, Jung’s heir apparent for twenty-five years in Zurich. She has a background in Jungian psychology, archeology, and philosophy. She has worked on alchemical texts at the Palazzo Corsini, and Vatican Library in Rome. The artist began sculpting in bronze at the Kansas City Art Institute at sixteen, and continues to work in the medium. During her year on the Prix de Rome, she worked on large winged tubs at the Mariani Foundry in Pietrasanta. Her large-scale projection pieces have included “Conversations with Angels” at the Majdanek Museum in Poland.

Ann McCoy has received the following awards: the Asian Cultural Council, the Pollock Krasner Foundation, the Adolph and Esther Gottlieb Foundation Award, the Award in the Visual Arts, the Prix de Rome, the National Endowment for the Art, the Berliner Kunstler Program D.A.A.D., and the New Talent Award of Los Angeles County Museum of Art. She has shown work in the Venice Biennale and the Whitney Biennial, and has had one-person exhibitions in New York, Los Angeles, New Delhi, Poland, and Berlin.