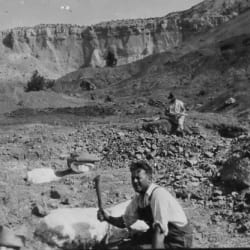 CAMP, CHARLES LEWIS:  Appointed for a study of vertebrate paleontology of the Triassic, particularly the Triassic of North America in its relations to the faunas of China, Russia, South Africa, South America and Scotland; tenure, twelve months from June 14, 1935.