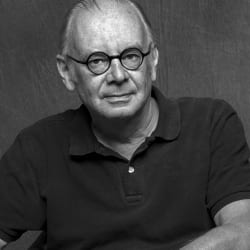 Charles Clough was born in Buffalo, New York in 1951. He attended Pratt Institute in Brooklyn, Ontario College of Art in Toronto, the University at Buffalo and New York University and has taught at Columbia University and the Rhode Island School of Design. He established his art studio in 1971 and has presented his work in more than 70 solo, and, more than 150 group, exhibitions. He has received grants and fellowships from the New York State Council on the Arts, National Endowment for the Arts, Adolph and Esther Gottlieb Foundation, the Pollock-Krasner Foundation and the John Simon Guggenheim Foundation. His works are included in the collections of more than 70 museums, including the Metropolitan Museum of Art, National Gallery of Art and Smithsonian American Art Museum. In 1974 Clough founded Hallwalls Contemporary Art Center, with Robert Longo, Cindy Sherman, Michael Zwack, Nancy Dwyer, Diane Bertolo and others in Buffalo.

I attended Buffalo’s Hutchinson Central Technical High School as an Advertising Art major. A few years earlier, I began to self-direct personal art projects related to illustration such as I knew it from popular magazines. At Pratt Institute my Two-dimensional Design professor, Joseph Phillips, provided the tools for becoming an artist: make your art, attend exhibitions, visit other artists’ studios and read relevant books and periodicals. After one year at Pratt, while staying with my parents in East Aurora, New York, I committed to “artist-hood”.

In Buffalo I visited sculptor, Larry Griffis’, Ashford Hollow Foundation and agreed to trade my assistance for studio space. I spent a year in Toronto at the Ontario College of Art. While there I hung out with the principles of A-Space and came to understand their “import/export” model for alternative art spaces. I returned to the Ashford Hollow Foundation with this and founded Hallwalls Contemporary Art Center with Robert Longo, Cindy Sherman and others in 1974. Hallwalls launched our art careers and we moved to New York to make art.

Through the 1970s I shuffled painting and photography while seeking to focus my interests and abilities. This resulted in colorful, gestural, abstract painting, made with “big finger” painting tools and photography, which documents my paintings and painterly qualities in nature and culture. There is also a collaborative aspect begun in the mid-1970s that carries through to the present.

My studio was located, variously, in Manhattan and Brooklyn. In 1999 I moved it to Westerly, Rhode Island. There, I abandoned the big fingers and once again used brushes. I layered paint and ground through the layers, while obsessively photographing the process. From Summer of 2008 through Spring 2009 I made a painting for each season that was painted by participants and un-painted by me. The process was photographed and the results of which were published as books.

I established my url as “clufff” in 1996. In 2011, I was, simultaneously, offered a studio in Buffalo and an exhibition was organized of forty years of my work at the University at Buffalo Art Gallery. Thus I came to think of my studio as the Clufffalo Institute, which includes my library, archive and collection. While retaining my Manhattan residence and Buffalo studio I have taken studio space at my mother’s home in East Aurora and also at the Roycroft, which abuts her property. The Roycroft was founded in 1895 as an Arts and Crafts Movement center and is now being revived. Here is where I have established my Clufffalo Painting Workshop in which participants add layers to a seasonal painting, which I complete by grinding through and polishing the layers of the paint. Participants and their states of the painting are photographed for book production.

So, along with Clufffalo: Seasons, there are Clufffalo Numbers and Clufffalo: Places—Numbers are painted by me, alone and Places are commissions by museums made with participants and finished by me. For example Clufffalo: Hamburg, was commissioned by the Albright-Knox Art Gallery/Erie County Public Art Initiative and 150 participants and I painted over the course of a day. This resulted in a 6 x 16 foot painting, owned by the Albright-Knox, on permanent display at the Hamburg, NY Public Library, a video from above that documents all participation, a book of the documentation and each participant was provided a board for mono-printing from the painting to have a take-away.

While each painting is essential as the marker and “touchstone” for history, the experiences of participation and the specific times and places of execution form an essential aspect of the work’s content. Visit www.clufff.com and the Roycroft to participate in a Clufffalo: Season Painting.