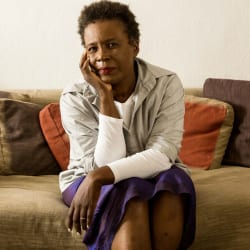 Claudia Rankine is the author of five collections of poetry, including Citizen: An American Lyric and Don’t Let Me Be Lonely; two plays, including Provenance of Beauty: A South Bronx Travelogue; and is the editor of five anthologies, including The Racial Imaginary: Writers on Race in the Life of the Mind. She is the recipient of many awards and fellowships, including most recently a 2017 MacArthur Fellowship, a United States Artist Fellowship, and the Bobbitt National Prize for Poetry. Rankine is a Chancellor of the Academy of American Poets and currently teaches at Yale University as the Frederick Iseman Professor of Poetry.

Rankine’s bestselling book, Citizen: An American Lyric (Graywolf, 2014), uses poetry, essay, cultural criticism, and images to explore what it means to be an American citizen. Citizen was the winner of the Forward Prize for Best Collection, the National Book Critics Circle Award for Poetry, (it was also a finalist in the criticism category, making it the first book in the award’s history to be a double nominee), the NAACP Image Award, the PEN Open Book Award, the PEN America Center USA Literary Award, and the LA Times Book Award for poetry. Citizen was also a winner of the Hurston/Wright Legacy Award, and was selected as an NPR Best Book of 2014, who stated: “This collection examines everyday encounters with racism in the second person, forcing the reader—regardless of identity—to engage a narrative haunted by the deaths of Michael Brown, Trayvon Martin, and Renisha McBride.” Citizen holds the distinction of being the only poetry book to be a New York Times bestseller in the nonfiction category.

Don’t Let Me Be Lonely (Graywolf, 2008) —a multi-genre project that blends poetry, essays, and image—is an experimental and deeply personal exploration of the condition of fragmented selfhood in contemporary America. Her other collections of poetry include Plot (2001); The End of the Alphabet (1998); and the award-winning Nothing in Nature is Private (1994). She co-produces a video series, “The Situation,” alongside John Lucas.

In 2016, Rankine co-founded The Racial Imaginary Institute (TRII), an interdisciplinary cultural laboratory in which the racial imaginaries of our time and place can be engaged, read, countered, contextualized and demystified.