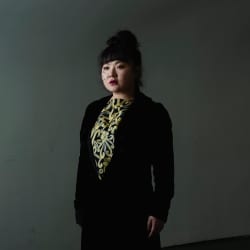 Known as “protean” and “chameleonic,” the National Public Radio voted her as one of 100 composers under 40 in 2011, the Washington Post listed her as one of top 35 female composers in classical music. In 2017, she won the Pulitzer Prize in Music for her opera, Angel’s Bone, (with libretto by Royce Vavrek).

Du Yun’s music can be heard on VIA, New Focus, Deutsche Grammophon, Pentatone , Oxingale and ATMA Classique. Education: The PreCollege of Shanghai Conservatory of Music, Oberlin Conservatory, Harvard University. Du Yun is currently on the composition faculty at the Peabody Institute and the artist-in-residence at the SHCM-Berklee Contemporary Music Institute. She was a founding member of ICE, in 2014-2018 the artistic director of MATA, a pioneering international festival dedicated to commissioning and presenting young composers from around the world. In order to championing more cross-regional collaborations, she spearheaded the inaugural Pan Asia Sounding Festival in 2018 at National Sawdust in New York City, future iterations in Hong Kong and London.

As an avid performer, she has appeared in many assorted holes and halls. Her onstage persona has been described by the New York Times as “an indie pop diva with an avant-garde edge.” She also leads her band, Ok Miss.

As a performance artist, solo engagements include the 2012 Guangzhou Art Triennial at the Guangzhou Opera House, the National Academy Museum (USA), the inaugural Shanghai Project and Contemporary Arts Center Córdoba (Spain). Her ongoing collaboration works with the Pakistani-American visual artist Shahzia Sikander have shown around the world, and as permanent collection at the Philadelphia Museum of Art and the Guggenheim Abu Dhabi.

She has also worked in the theatres. She is the composer for the musical Dim Sum Warriors (opened in Shanghai in 2017), on tour in China in 25 major cities in 2018.