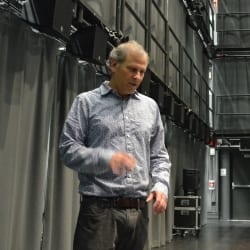 Eric Lyon has composed for both acoustic instruments and computer music forces since the early 1980s, studying music at Princeton University, Eastman School of Music, and UC San Diego. His work focuses on spatial orchestration for high-density loudspeaker arrays, computer chamber music, algorithmic sound design, and chaos-driven instrumental scores. Lyon’s publicly released software includes FFTease and LyonPotpourri, collections of audio objects written for Max/MSP and Pd. He is the author of “Designing Audio Objects for Max/MSP and Pd” (A-R Editions, Inc.), which explicates the process of designing and implementing audio DSP externals. In 2016, Lyon was guest editor of the Computer Music Journal, editing two issues (CMJ 40:4 and 41:1) dedicated to the subject of high-density loudspeaker arrays. Lyon also curated the 2016 Computer Music Journal Sound Anthology, which was the first binaural anthology published by the CMJ. Lyon has directed the Spatial Music Workshop at Virginia Tech since 2015, and has served as Artistic Director for Cube Fest since 2016.

In 2011, Lyon was awarded a Giga-Hertz prize from ZKM, resulting in the creation of the 43-channel computer music composition “Spirits.” His 124-channel composition “The Cascades” was premiered in the Cube at Virginia Tech’s Moss Arts Center, and performed on the BEAST system at BEAST FEaST 2015 in Birmingham, and at the SARC Sonic Lab in Belfast at Sonorities/Speculations 2016. His octophonic composition “Spaced Images with Noise and Line” was selected for performance at MUSLAB 2015, and his computer music composition “Light Rain, Laganside” was selected for performance at the International Society for Contemporary Music’s 2016 World Music Days festival.

Works in progress include “Earth to Kathy,” an evening-long set of character pieces for pianist Kathleen Supové, “Astrology and Astronomy,” a set of dance pieces for violin duo String Noise, “Chameleon,” a set of increasingly intricate pieces for solo percussion with electronics for Stuart Gerber and his bespoke percussion instruments, and “Marimbas Everywhere,” an interactive composition for marimba sextet with 134 channels of live processing and spatialization, to be premiered by the Virginia Tech Percussion Ensemble in April 2018.