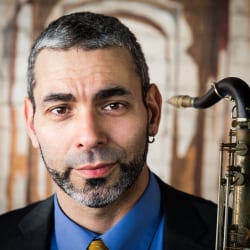 Salles has won several awards, including a 2015-16 NALAC Fund for the Arts Grant, a 2009-10 French American Jazz Exchange Grant, and a 2005-06 Chamber Music America New Works: Creation and Presentation Grant Program, sponsored by The Doris Duke Charitable Foundation. He was also awarded First Place in the 2001 Concurso SGAE de Jazz “TETE MONTOLIU”, with his composition The Return of The Chromo Sapiens.

An active musician in the US since 1995, Felipe has worked and recorded with prominent jazz artists, including Randy Brecker, David Liebman, Lionel Loueke, Jerry Bergonzi, Chico Pinheiro, Jovino Santos Neto, Oscar Stagnaro, Duduka Da Fonseca, Maucha Adnet, Tony Lujan, Luciana Souza, and Bob Moses. He has toured extensively in Europe, North and South Americas, India and Australia, as a sideman and as a leader of his own group.

Felipe Salles is currently an Associate Professor of Jazz and African-American Music Studies at the University of Massachusetts Amherst.