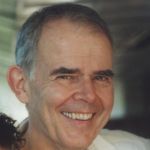 My first jobs were in broadcasting, first at NBC as a writer/reporter, then a historic summer in Moscow for NBC News, then to Australia as a writer/ producer/director of documentaries for the Australian Broadcasting Commission.

Once back in New York, I joined CBS News as a documentary producer. During my time at CBS, I researched, production managed, and coproduced four major documentaries: two in Italy, one in France, one in England.

My produced screen and television writing credits since leaving CBS include Dogs of War, Luna (with Bernardo Bertolucci), Sweet Lorraine, Out Cold, and Tidal Wave, as well as TV episodes and uncredited rewrites of several theatrical feature films.

Plays I have written have been produced in a variety of venues here and in Europe. I’ve also had premieres of my translations of short dramatic works by Anton Chekhov. In January 2009, the Nora Theatre Company, Cambridge, Massachusetts, presented the world premiere of my commissioned new translation of The Cherry Orchard.

Born in Denmark of Russian parents, I’m fluent in Russian, French, and Italian, and have worked as a screenwriter in those and other countries. I’m an Adjunct Professor of screen and television writing in the Goldberg Department of Dramatic Writing at NYU’s Tisch School of the Arts, and Visiting Professor of Screenwriting at the International School of Film & Television, San Antonio de los Baños, Cuba.

Once upon a time, I had the rewarding teaching experience of working for a few years as a professional ski instructor certified by the Alliance de moniteurs de ski du Canada.