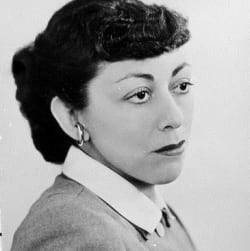 "Jews have a pride of heritage, tradition and tragedy.  So have Southerners, with different subject matter.  Both are often anecdotalists, of humors peculiar to each–and run to large family gatherings. . . . The combination was odd all round, volcanic to meditative to fruitfully dull, bound to produce someone interested in character, society and time." — Hortense Calisher

Hortense Calisher, born in New York City in 1911, is author of fifteen novels, seven volumes of short fiction, and two memoirs.  Her short stories began appearing in The New Yorker in 1948 and quickly became widely anthologized, as well as translated throughout the world.  Among her best known are In Greenwich There Are Many Gravelled Walks, Heartburn, The Night Club in the Woods, Il Ploer Da Mo Koer, A Wreath for Miss Totten, The Middle Drawer, and The Scream on Fifty-Seventh Street.

"The Hollow Boy," televised for the PBS series American Short Story, featured actors Kathleen Chalfont and Jerry Stiller.  Her first novel, False Entry (1961), about a man whose exceptional memory allows him to make false entry into other people’s lives, was a finalist for the National Book Award. Her autobiographical book Herself (1972), a memoir as well as literary criticism, was also nominated for the National Book Award.  Her third nomination for that award came with the publication of Collected Stories (1975). In 1987, The Bobby-Soxer won the Kafka Prize for the year’s best novel.  On the publication in Britain of her novel Age (1996), about a long-married loving couple who keep dual diaries intended to be read by the surviving partner, The Spectator applauded it as "a marvel!" She received a Lifetime Achievement Award from the National Endowment for the Arts in 1989.

Hortense Calisher was president of PEN American Center (1986-87) and of the American Academy of Arts and Letters (1987-90). As a visiting professor, she taught at twelve universities, including Brown, Columbia, Pennsylvania, Brandeis, and Stanford, and was Regents Professor at the University of California in 1977.  Educated at Hunter College High School and Barnard College (A.B., 1932), she has long found in New York City what she terms "a seat for reflections." Her Virginia-born father, a perfume manufacturer, was twenty-two years older than her German-born mother.  There were many influences in the household–longer-than-normal gaps between generations, conflicts of interest between the mercantile and the scholarly, the "American" and the émigré.