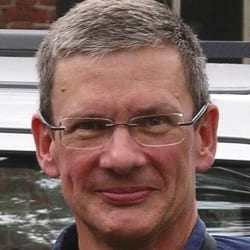 After studying for my B.A. at a small liberal-arts university in Ontario, I traveled to Oxford as a Rhodes Scholar and received my D.Phil. in 1983. After two postdoctoral fellowships at Stanford University and the University of Alberta, I joined the University of Toronto in 1987, where I have been teaching ever since.

I teach courses on German and European history from 1770 to 1945, but my research and writing have been devoted almost exclusively to German history between 1860 and 1918. I explore the “cultural history of politics” by studying political ideologies and movements in the context of socio-economic modernization, political systems, and debates about political “fairness.” I have written five single-authored books and edited or co-edited twelve multi-authored volumes (including two special issues of scholarly journals and one collection of online documents and images). Many of these books have tried to demonstrate the value of using local and regional lenses to explore issues of identity, moments of crisis, and elements of contingency. These publications often depict social and political tensions in pre-1914 Germany: between conservatism, liberalism, and socialism; between authoritarianism and democracy; between movement and stasis; between local, regional, and national political cultures; and between Jews and their enemies.

My first book was Notables of the Right: The Conservative Party and Political Mobilization in Germany, 1876-1918 (London, 1988): it depicted the Conservative Party’s inability simultaneously to wield high-level influence and mobilize popular forces. This monograph was followed up by three essay collections, the first two of which were coedited with Larry Eugene Jones: Elections, Mass Politics, and Social Change in Modern Germany (Cambridge, 1992), and Between Reform, Reaction, and Resistance. Studies in the History of German Conservatism from 1789 to 1945 (Oxford, 1993). The third resulted from a workshop I co-organized during my year in Berlin as a Humboldt Research Fellow, when I was a Visiting Professor of Political Science at the Free University Berlin. Coedited with Simone Lässig and Karl Heinrich Pohl, this book was titled Modernisierung und Region im wilhelminischen Deutschland: Wahlen, Wahlrecht und Politische Kultur [Modernization and Region in Wilhelmine Germany: Elections, Suffrage, and Political Culture] (Bielefeld, Dresden, 1995, 2nd revised ed. 1998). My first teaching book—a slim volume commissioned by Macmillan Press and St. Martin’s Press—appeared as Germany in the Age of Kaiser Wilhelm II (Basingstoke, New York, 1996). It used a dual approach to introduce students and non-specialists to the tumultuous Wilhelmine age, surveying key developments in public and private life while explaining why scholars have so often reversed the interpretive “switches” guiding research on this period. A Chinese edition appeared a number of years later (Beijing, 2013).

A large international conference I organized in Toronto in 1998 yielded three edited collections: Saxon Signposts, which appeared as a special issue of the UK journal German History (vol. 17, no. 4, 1999); Saxony in German History: Culture, Society, and Politics, 1830-1933 (Ann Arbor, 2000); and Sachsen in Deutschland: Politik, Kultur und Gesellschaft 1830-1918 (Bielefeld, Dresden, 2000). These volumes focused on a territory that lay behind the Iron Curtain before the fall of the Berlin Wall: when Saxony became one of the five East German states to join the Federal Republic of Germany, its archives were opened up to western scholars, and I was among the first researchers to make use of these sources to reconsider Saxony’s role in the German Empire.

Two more coedited collections appeared when I collaborated with Thomas Adam and Geoff Eley in 2001 and 2003: these were Zwischen Markt und Staat. Stifter und Stiftungen im transatlantischen Vergleich [Between Market and State: Philanthropists and Foundations in Transatlantic Comparison], which appeared as a special double issue of the German journal Comparativ (vol. 11, nos. 5-6, 2001); and Wilhelminism and Its Legacies: German Modernities, Imperialism, and the Meanings of Reform, 1890-1930 (Oxford, 2003). My editorial work on this volume was done mainly when I was a Visiting Professor of History at the University of Göttingen in 2002-3, where I held the Friedrich Wilhelm Bessel Research Prize, awarded to mid-career scholars by the Alexander von Humboldt Foundation.

During the years 2003-8 I completed four other book-length projects. The first was a collection of online materials for one volume of a ten-volume project entitled German History in Documents and Images. My contribution was volume 4, Forging an Empire: Bismarckian Germany (1866-1890), which comprises approximately 2,500 pages of documents (in German and English) and images. I am now working on a revised second edition of this volume. The second book was a collection of my own essays: The German Right: Political Limits of the Authoritarian Imagination, 1860-1920 (Toronto, 2006). Here I considered how the authoritarian imagination inspired the German Right and how political pragmatism constrained it. I also challenged the assumption that, if Imperial Germany was modern, it could not also have been authoritarian. The third collection also resulted from a University of Toronto conference, and it was co-edited with David Blackbourn: Localism, Landscape, and the Ambiguities of Place: German-Speaking Central Europe, 1860-1930 (Toronto, 2007). I edited the fourth volume, Imperial Germany 1871-1918, for the “Short Oxford History of Germany” series (Oxford, 2008). With contributions from an A-list of international scholars, this book provided a critical introduction to this crucial era, taking care—as I do in all my work—to situate Imperial Germany in the larger sweep of German history without suggesting that Nazism or the Holocaust were inevitable endpoints to developments charted for the pre-1918 era.

From 2009 to 2017 I was striving to finish my monograph on German elections. But I also prepared two other books for press. More of my own essays were published as Germany’s Second Reich: Portraits and Pathways (Toronto, 2015). This book was about how Germans saw themselves, how others saw them, and how each side understood the changes wrought by the arrival of modern times after 1860. It was also more speculative and, at times, more playful than The German Right. The second book was the product of another Toronto conference, coedited with Ute Planert: Decades of Reconstruction: Postwar Societies, State-Building, and International Relations from the Seven Years’ War to the Cold War (Cambridge, 2017).

I brought twenty-five years of research and writing to fruition with publication of the 700-page monograph Red Saxony: Election Battles and the Spectre of Democracy in Germany, 1860-1918 (Oxford, 2017), which is complemented by an extensive Online Supplement. In this book I argue that election battles were fought so fiercely in Imperial Germany because they reflected two kinds of democratization. Social democratization could not be stopped, but political democratization was opposed by many members of the German bourgeoisie. Frightened by the electoral success of the Social Democrats after 1871, anti-democrats deployed many strategies that flew in the face of electoral fairness. They battled socialists, liberals, and Jews at election time, but they also strove to rewrite the electoral rules of the game. I devote special attention to various semi-democratic voting systems whereby a general and equal suffrage (for the Reichstag) was combined with limited and unequal ones for local and regional parliaments. Although the bourgeois face of German authoritarianism was nowhere more evident than in the Kingdom of Saxony, I illustrate how other Germans, too, grew to fear the spectre of democracy. That fear made it easier for Hitler and the Nazis to win elections in the 1920s and to entomb German democracy in 1933.

My past research has been supported by grants and fellowships from the Social Sciences and Humanities Research Council of Canada (SSHRC), the German Academic Exchange Service, and the Gerda Henkel Foundation, among others. In 2011 I became an elected fellow of the Royal Society of Canada, and together with Simon Dixon and Mark Mazower I am a General Editor of Oxford Studies in Modern European History. My current research project, for which I was awarded Guggenheim and Killam Foundation fellowships in 2015 and SSHRC grants in 2015 and 2017, is to write a new biography of August Bebel, the founder of Germany’s Social Democratic Party (SPD) and the most important leader of the Second International. My working title is “The Workers’ Emperor”: August Bebel’s Struggle for Democratic Reform and Social Justice in Germany and the World, 1840-1914. I plan to add a few wrinkles to the tried-and-true “man and his times” approach, in part to draw on my career-long engagement with other scholars of Imperial Germany and in part to side-step the “biographical illusion” (Bourdieu), according to which biographers impose more coherence on a historical figure’s life than it warrants.