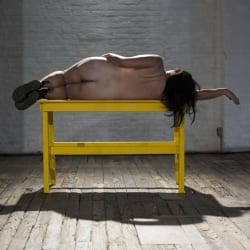 Jen Rosenblit makes performances in New York City and Berlin surrounding architectures, bodies and ideas concerned with problems that arise inside of agendas for togetherness. Rosenblit’s works lean toward the uncanny and maintenance of care, often incorporating text while the process focuses on an improvisational approach to choreographic thought, locating ways of being together amidst impossible spaces.

Recent works include Stand In (upcoming, 2018-2019 co-production between Sophiensaele(DE) and The Chocolate Factory Theater(NYC), Everything Fits In The Room( a 2017 collaboration with Simone Aughterlony, HAU Hebbel am Ufer), Swivel Spot (2017, The Kitchen), Clap Hands (2016, The Invisible Dog/New York Live Arts), a Natural dance (2014, The Kitchen), Pastor Pasture, (2013, Issue Project Room), In Mouth (2012, Dance Theater Workshop), and When Them (2010, Danspace Project).

Rosenblit is a 2018 Atelier Mondial Artist-in-Residence in Basel, Switzerland, a 2015-16 Movement Research Artist-in-Residence, a 2014-2015 workspace artist through Lower Manhattan Cultural Council, a recipient of a 2014 New York Dance and Performance “Bessie” Award for Emerging Choreographer for a Natural dance, an inaugural recipient of THE AWARD, a 2013 Fellow at Insel Hombroich (Nuese, Germany) and a recipient of the 2012 Grant to Artists from the Foundation for Contemporary Arts.

Rosenblit holds a Bachelors degree from Hampshire College, Amherst, MA, with a concentration in Performance Theory and Practice.