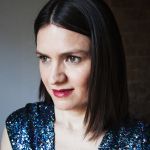 Performed by leading musicians and ensembles across the globe, the music of Kati Agócs merges lapidary rigor with sensuous lyricism. A citation from the American Academy of Arts and Letters calls it “blessedly unsophisticated in any conventional way . . . instead it has heart. It reaches the hearer through its melody, drama, and clear design" and cites her music’s "soulful directness” and "naturalness of dissonance."

The New York Times has characterized her chamber music as "striking," her orchestral music as "filled with attractive ideas," and her vocal music as possessing "an almost 19th-century naturalness," while the Boston Globe has described it as "music of fluidity and austere beauty." Fanfare magazine hailed her violin-piano duet Supernatural Love as "serene and unworldly, exploring space with sound in a way that seems to evoke the time before the universe hosted life."

Recent works include <i style="mso-bidi-font-style:

normal”>Vessel for Metropolis Ensemble (commissioned by Meet the Composer); Elysium for the National Arts Centre Orchestra (commissioned for the 2010 Winter Olympics in Vancouver); Requiem Fragments (commissioned by the CBC Radio Orchestra for their Farewell Concert); <i style="mso-bidi-font-style:

Born in 1975 in Windsor, Canada, of Hungarian and American background, Kati Agócs has been a full-time member of the composition faculty of the New England Conservatory in Boston since 2008. She earned the Doctor of Musical Arts and Masters degrees in composition from The Juilliard School, where her principal teacher was Milton Babbitt. She is also an alumna of the Aspen Music School, Tanglewood Music Festival, Sarah Lawrence College, and Lester B. Pearson College of the Pacific (one of the United World Colleges), all of which she attended on full scholarship. She maintains a work studio in the village of Flatrock, near St. John’s, Newfoundland, Canada.