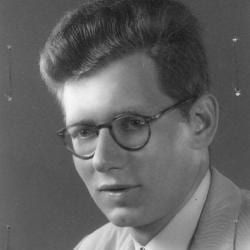 Lawrence Slobodkin was the author of such influential ecological books as Growth and Regulation of Animal Populations (1961; rpt., 1980), Simplicity and Complexity in Games of the Intellect (1992), and A Citizen’s Guide to Ecology (2003). However, he was probably best known for his seminal paper “Community Structure, Population Control and Competition.”

When that paper, which Slobodkin coauthored with his University of Michigan colleagues Nelson G. Hairston Sr. and Frederick E. Smith, appeared in The American Naturalist in 1960 (94:421-25), its thesis was so simple as to be revolutionary: the abundance of green plants throughout the world indicates that predators, not food supply, limit herbivore populations. Now familiarly referred to as “HSS” (for the authors’ initials) or most commonly as “The World is Green,” that four-page paper is still spurring debate and research to this day. “The World is Green” is typical of Slobodkin’s thinking: he had a gift for seeing the larger ecological picture without losing sight of its important details.

Born in 1928 in the Bronx, Lawrence Slobodkin was fascinated by the natural world from an early age, as he recalled in “My Complete Works and More,” which was published in Evolutionary Ecology Research in 2009 (11:327-354): “My interest in ecology, a decade before I knew the word, began as an interest in animals. I saw them in the zoo and in Crotona Park. I saw woodland, stream and farm animals during summers in the ‘country’ and while exploring the rock tide pools of the artists’ summer colony of Rockport on Cape Ann, Massachusetts.” (His father, Louis Slobodkin, was a well-known sculptor, and author and illustrator of children’s books.) Trips to the American Museum of Natural History, his own observations with his toy Japanese microscope of the rotifers and ciliates that grew in his homemade “stinking infusions of lettuce leaves in tap water,” and his precocious study of Kudo’s Handbook of Protozoology (1931) so intrigued him that by age eleven he had determined to become a protozoan taxonomist.

Although over the years his focus would change, his course was set.

After graduating from the Bronx High School of Science, he attended Bethany College in West Virginia. By age nineteen he had earned his college degree and was working as a technician at Sloan Kettering Cancer Research Institution. Soon afterward he was admitted to Yale Graduate School. Supported during his time there by Sheffield and Sterling fellowships, he studied zoology under G. E. Hutchinson. His principal work at this time involved population studies of the water flea Daphnia obtuse, which led to the then novel (and now standard) understanding that conservation biologists must be concerned with not only “enumeration [but] age, genetics, and physiological condition of the animals” when constructing population models.

On receiving his Ph.D. in 1951 he was appointed Chief of Red Tide Investigations for the United States Fish and Wildlife Services. Within two years Slobodkin and mathematician Henry Kierstead developed a mathematical model that solved the “mystery” of red tides, which, of course, negated the need for further budget allocations to that particular line of research, much to the consternation of his superiors.

Shortly after quitting the Fish and Wildlife Services, he took up an appointment as an Instructor in the Zoology Department at the University of Michigan. During his fifteen-year tenure there, he not only received numerous faculty awards, including the Distinguished Service Award and Henry Russell Award for Research, but also his first Guggenheim Fellowship (1961) and two Fulbright Fellowships (1962, 1965-66). He used the time away from his responsibilities at Michigan that these fellowships afforded him to travel to Israel where he taught at the Hebrew University at Jerusalem. He returned to Israel in 1965 to study the coral reefs of the Red Sea in Eilat in collaboration with researchers from Tel Aviv University, where Slobodkin also taught graduate ecology courses. Among his accomplishments there was his establishment with Yossi Loya of the Loya-Slobodkin Transect Method of measuring reef diversity. In addition, from 1959 to 1965 he also served as an Instructor in Marine Ecology at the Marine Biology Laboratory in Woods Hole, Massachusetts.

In 1968, Slobodkin left Michigan to join the faculty of SUNY Stony Brook as Professor of Biology and founding Director of its Ecology and Evolution Department, among the first such departments in the country. At Stony Brook, he was instrumental in establishing the scientific credentials of the field of ecology, moving it from a largely descriptive discipline to one subject to the rigors of scientific testing and methodology. Or, as evolutionary ecologist Joseph Travis phrased it, he “was a pioneer in blending mathematical reasoning and empirical observations.”

In 1974, Slobodkin received a second Guggenheim Fellowship to study the ramifications of a theory of evolutionary strategy, working principally at the Smithsonian Institution and the Center for Advanced Study in the Behavioral Sciences at Stanford. Other honors include election to fellowship in the American Academy of Arts and Sciences (1970) and appointment as the Academy’s John Wesley Powell Lecturer in 1987; election as a Foreign Member of the Linnean Society; Presidency of the American Society of Naturalists (1985); and a Fellowship at the Woodrow Wilson International Center for Scholars (1990). In addition, in 1995 he was honored with the Eminent Ecologist Award by the Ecological Society of America.

Over the course of his decades’ long career, Lawrence Slobodkin’s researches were published in such important journals as Science, Ecology, American Zoology, Nature, Journal of Genetics, and Journal of Evolutionary Ecology, and he served on the editorial boards of several of these publications, among others. He also held numerous visiting appointments, including at  NASA; the Laboratoiro di Genetica ed Evoluzionistica in Pavia, Italy; the Weizman Institute and Ben-Gurion University in Israel; and the Tsukuba National University in Japan.

Lawrence Slobodkin died at his home on September 18, 2009. He is survived by his wife of fifty-seven years, Tamara, and their three children.