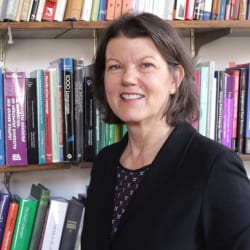 Lenore A. Grenoble is the John Matthews Manly Distinguished Service Professor in the Department of Linguistics and the College.

Grenoble has been studying language endangerment for the last 20 years or so, with attention to the kinds of linguistic changes that take place when speakers shift from one language to another, in tandem with research that focuses on understanding the context and causes—social, political and economic—that underlie language shift and loss. An integral part of this research agenda has been developing mechanisms for reversing, or at least offsetting, language shift and increasing language vitality.

The Guggenheim Foundation supports a major project on the interrelationship between language and well-being among Arctic Indigenous peoples at a time when the combination of major social changes, such as rapid urbanization, and climate change are reshaping the lives of Indigenous peoples in fundamental ways. The project, Living the Good Life? Language Vitality, Urbanization, and Well-Being in the Arctic, investigates the nexus of these factors in three case studies. The first of these, supported by Guggenheim, focuses on urbanization of Indigenous in Yakutsk, the capital of the Sakha Republic in the Russian Federation, and the fastest growing northern city in that country. Contrastive cases studies are provided by a study of Sámi peoples in Oslo, Norway, and Inuit in Nuuk, Greenland.

This project has emerged from many years of work in the Russian Arctic and Greenland. Grenoble specializes in Slavic and Arctic Indigenous languages, and is currently conducting fieldwork on several languages spoken in northeastern Siberia: Even and Evenki (Tungusic languages), Chukchi (Chukotko-Kamchatkan), Sakha (Turkic) and two Yukaghir languages (recently classified as Uralic) in Siberia, all in contact with Russian. She has also worked with and for the Inuit Circumpolar Council and the Permanent Participants of the Arctic Council to work to promote the vitality of Arctic Indigenous languages.

Grenoble completed a PhD in Slavic Linguistics from the University of California, Berkeley. After teaching at Dartmouth College in both the Russian Department and the Program in Linguistics & Cognitive Science, she joined the University of Chicago in 2007. She is a member of the American Academy of Arts and Sciences and has held major grants from the National Science Foundation, the Fulbright Foundation, the American Council of Learned Societies, American Councils for International Education and the International Research and Exchanges Board. Her books include Saving Languages. An Introduction to Language Revitalization (with Lindsay J. Whaley, 2006); Language Policy in the Former Soviet Union (2003); Deixis and Information Packaging in Russian Discourse (1998) and Methodological Issues in Documentation & Reconstruction: The Curious Case of Odessan Russian (with Jessica Kantarovich, forthcoming) and Contact, Change, and Loss: Morphosyntactic Change and the Impact of Russian (forthcoming).