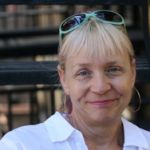 Hadleigh-West’s films and presentations have been used around the world in theaters, broadcast television, cable outlets, nonprofit organizations, conferences, corporations, colleges, and government agencies.  Since 2002 the Department of Defense has been using her work to educate all branches of the military on issues of sexism, sexual harassment, and sexual assault.

Hadleigh-West is a 2005 and 2009 Alcyon Fellow, 2004 New York State Council on the Arts Fellow,  2001 University of Louisville Distinguished Professor Nominee, 2000 Rockefeller Fellow Nominee, 2000 Tiny Tony Award Winner, and a 1998 Caligari Prize Nominee. She received a B.A .with Honors in Visual Communications from George Washington University and holds a M.F.A. with a Merit Award from the School of Visual Arts in New York City.

Sick to Death! (in production)