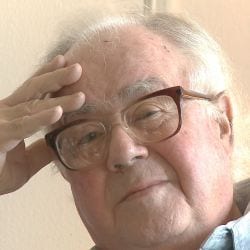 After studying film production at Hans Richter’s Institute of Film Techniques of the City College of New York, Kirchheimer entered the New York film industry in 1952, while at the same time self-financing his own independent films. In 1955 he worked with Richter to complete 8X8 and The Passionate Pastime, and assisted Jay Leyda in reconstituting Eisenstein’s Que Viva Mexico! footage into study reels for the Museum of Modern Art.

While working in the documentary departments of American television networks he edited, filmed or directed over 300 films, ranging from cultural programming, such as Leonard Bernstein in Venice for CBS, to biography for Time-Life Films, as in Khrushchev Remembers. Beginning in 1964 he was the cameraman and associate producer for six films directed by the pioneering documentarian Leo Hurwitz. From 1965 to 1980 he completed five independent films: Colossus on the River, Claw, Short Circuit, Bridge High, and Stations of the Elevated.

Starting in 1986 Kirchheimer embarked on a number of feature documentaries: We Were So Beloved (1986); Tall: The American Skyscraper and Louis Sullivan (2004); SprayMasters (2008); Art Is . . . The Permanent Revolution (2012), and Canners (2014). Canners, which had a sold-out “sneak preview” in 2015 at The Brooklyn Academy of Music, was shown with Kirchheimer’s most recent film, the 30-minute Discovery in a Painting (Cezanne’s “Still Life with Apples”) .

The Encyclopedia of the Documentary Film writes:

The subjects [Kirchheimer] chooses, whether it is the city’s architectural environment or its graffiti or the docking of an ocean liner, reflect not only the lives of people implicated in these subjects; they also create a frame for a larger understanding of city life. His films are hopeful, yet they admonish the future.

In December 2014 Kirchheimer interviewed twenty-two friends for what will be (working title) My Coffee with Jewish Friends. This is contemplated to be a 2-part 4-hour film. Also, in mid- 2015 he started editing the first of two black & white half-hour films to make up a duology to be entitled New York: Symphony of a City, referencing Walter Ruttmann’s 1927 Berlin: Symphony of a City.

Together with his wife, Gloria DeVidas Kirchheimer, he wrote We Were So Beloved: Autobiography of a German-Jewish Community, and is finishing a book of film essays, Truth without Vérité.

In addition to his work as an independent filmmaker, Kirchheimer has been a professor of film & video at several colleges and universities, and is currently at the school of Visual Arts, where he has taught since 1975.

Follow this link to view Kirchheimer’s Trailer Collection on Vimeo.