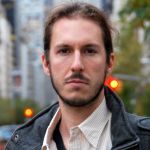 Mark Kendall is a filmmaker who lives and works in Philadelphia.  His short film, The Time Machine, was a National Finalist at the 2011 Student Academy Awards and winner of eleven additional festival awards.  The film went on to receive international recognition, and was presented at Anthology Film Archives (2011) and at the GRID Bienniale in Amsterdam (2012).

La Camioneta, his feature directorial debut, premiered at the SXSW Film Festival, was selected by Stephen Holden as a New York Times Critics’ Pick, was featured in IndieWire’s list of the “Top Docs of 2013,” received an award from the International Documentary Association (IDA), and marked him as “a name to watch” by Variety.  The film was released theatrically in the U.S., Mexico, and Guatemala.

Mark Kendall was awarded a Guggenheim Fellowship to develop his next project, which explores the relationship between time, craft, and landscape in a small town in Sweden’s Arctic circle.

Kendall is a Sundance Institute Fellow (2011), an IFP/Film Society of Lincoln Center “Emerging Visions” Fellow. (2011), and a Foreign Area & Language Studies Fellow (2006–2008).  His work has received additional support from the Sundance Institute Documentary Fund, the Jerome Foundation, the SVA Alumni Society, and the Indie Film Clinic, among others.

Mark Kendall owns Follow Your Nose Films, an independent documentary film production company, and also works as a freelance cinematographer and editor.  He holds a B.A in Anthropology and an M.A in Latin American Studies from Vanderbilt University, as well as an M.F.A in Social Documentary Film from the School of Visual Arts.