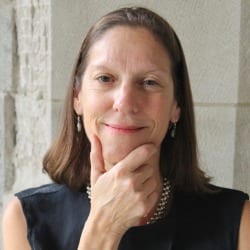 As a historian and a writer, Martha Hodes has devoted her career to reconstructing the lives of ordinary people facing adverse circumstances, ranging from risk and fear, to ostracism and grief, to violence and death. Her work relies on intensive archival research in order to weave the lives of her protagonists into deep historical context, presented to readers through compelling narrative.

Professor of History at New York University, Hodes is the author, most recently, of Mourning Lincoln, winner of the Lincoln Book Prize awarded by the Gilder Lehrman Institute of American History, and the Avery O. Craven Prize awarded by the Organization of American Historians. Mourning Lincoln was named an editor’s choice in the New York Times Book Review, a best book of the year by the Wall Street Journal, and one of ten long-list finalists for the National Book Award. Hodes is also the author of two more award-winning books, The Sea Captain’s Wife: A True Story of Love, Race, and War in the Nineteenth Century and White Women, Black Men: Illicit Sex in the Nineteenth-Century South. She is the recipient of numerous fellowships, including from the National Endowment for the Humanities, the American Council of Learned Societies, the Dorothy and Lewis B. Cullman Center for Scholars and Writers at the New York Public Library, the Charles Warren Center for Studies in American History at Harvard University, the Fulbright Commission, the Schomburg Center for Research in Black Culture, and the Whiting Foundation. She has served as a Scholar-in-Residence at the John F. Kennedy Institute for North American Studies at the Free University of Berlin and has presented her scholarship nationally and internationally, at colleges and universities, high schools and elementary schools, museums and historical societies, national parks and literary festivals.

At New York University, Hodes teaches courses on race, the Civil War, and the nineteenth-century United States, as well as courses devoted to the art and craft of history-writing, including History and Storytelling, Reconstructing Lives, Biography as History, Autobiography and History, and Reading and Writing Experimental History. She is a winner of NYU’s Golden Dozen Award for Teaching Excellence. Hodes holds degrees from Bowdoin College, Harvard University, and Princeton University, and is an elected lifetime fellow of the Society of American Historians, an organization devoted to distinguished historical writing.

With the support of the Guggenheim Foundation, Martha Hodes will write a book exploring history and memory through a 1970 airplane hijacking, in which she was a twelve-year-old passenger held hostage in the Jordan desert for a week.

Follow this link to Martha Hodes’s interview on PBS News Hour: “How America Moved on in the Days After the Civil War”