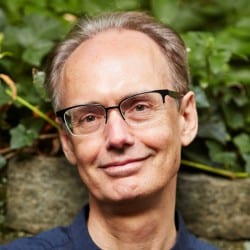 “Michael Harrison’s Revelation: Music in Pure Intonation is probably the most brilliant and original extended composition for solo piano since the early works of Frederic Rzewski three decades ago (and no, I’m not forgetting Elliott Carter).” – Pulitzer Prize-winning music critic, Tim Page

Composer/pianist Michael Harrison occupies a unique place in the world of music. His works are a blend of European musical traditions and those of North Indian classical music, forging an entirely new approach to composition through tunings and methodologies that employ and extend the ancient concept of “just intonation.” The quality of his work and personal vision has earned him the label of, in the words of composer Philip Glass, an “American maverick.”

As a recipient of a Guggenheim Fellowship (2018), Harrison will be creating a new work for Alarm Will Sound. He is currently working on a commission for Del Sol Quartet, based in San Francisco.

Time Loops, his album with cellist Maya Beiser, on Bang on a Can’s Cantaloupe Music label, was selected in NPR’s Top 10 Classical Albums of 2012. His 72-minute work for just intonation piano, Revelation: Music in Pure Intonation (Cantaloupe), was chosen by The New York Times, The Boston Globe and TimeOut New York as one of the Best Classical Recordings of 2007.

Just Constellations, commissioned by Grammy-winning vocal octet, Roomful of Teeth, was premiered at MASS MoCA and the Park Avenue Armory, and recorded in The TANK, a 65’ water tank in rural Colorado with a 40-second reverb. The group’s performance was in the New Yorker’s “Ten Notable Performances of 2017,” and the subject of a feature article in which Alex Ross wrote, “Harrison’s glacially beautiful 2015 piece ‘Just Constellations’ made the deepest connection to the place: as luminous chords accumulated, it was difficult to tell which pitches were coming from live singers and which were coming out of the walls.” The New York Times wrote, “… particularly arresting, a celestial soundscape of gorgeous harmonies… the notes rang out like a jubilantly microtonal choir of bells.”

Just Ancient Loops, Harrison’s collaboration with filmmaker Bill Morrison and cellist Maya Beiser, has received over 40 performances, including a 4-month looping-program at the Museum of Modern Art, the Next Wave Festival at the Brooklyn Academy of Music, the Louvre, Bang on a Can marathon, Ojai Music Festival, Big Ears Festival, M.I.T., Strings of Autumn in Prague, at Sundance and other film festivals throughout the world. Nautilus wrote, “If there really is a music of the spheres, the sound of a fundamental harmony in the universe, it has to be Just Ancient Loops… Played on the cello, and complemented by a film created from archival clips and a recreation of Jupiter’s moons in orbit, Just Ancient Loops… propels viewers through time and space, landing them in the present, elated.”

“A pulsating, shimmering wall of sound in which all kinds of ghost-like sound effects and structures appear. A formidable pianist, Harrison… has a fascination with reconciling form and improvisation through raga-like structures, which beckon towards an unexplored universe of sound relationships.”

As La Monte Young’s protégé, Harrison executed the specialized tunings and scores for Young’s 6½-hour work, The Well-Tuned Piano, eventually becoming the only other person to perform this work. This led him to create the Harmonic Piano, an extensively modified grand piano capable of playing 24 notes per octave. Along with Young and Terry Riley, Harrison was a disciple of Indian vocalist Pandit Pran Nath, starting in 1979, and since 1999, he has continued studying and performing Indian classical music as a disciple of Ustad Mashkoor Ali Khan. He is co-founder and president of the American Academy of Indian Classical Music.

“The intelligent discrimination with which he approaches his work is something that I have heard only in a tiny handful of classical recordings starting with Glenn Gould.” – Stephen Hill, National Public Radio