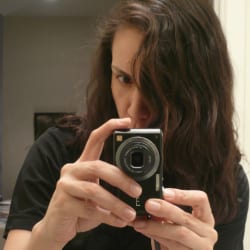 Born in Lima, Peru, Milagros de la Torre has been working with various conceptual photographic media since 1991. She studied communication sciences at the University of Lima and received a B.A. (Hons.) in photographic arts from the London College of Printing.

Milagros de la Torre’s work has been exhibited broadly and is part of major museum collections. Her first solo exhibition, consisting of works from her series Under the Black Sun (1991–1993) and curated by Robert Delpire, was presented at the Palais de Tokyo, Centre National de la Photographie, in Paris. Most recently, in 2012, the Americas Society in New York City mounted a solo show of her work entitled Observed, curated by Edward J. Sullivan, and the Museo de Arte de Lima (MALI) honored her with a midcareer retrospective exhibition. The catalogue issued in conjunction with Observed featured text by Edward Sullivan and a dialogue between the artist and Anne Wilkes Tucker, the Gus and Lyndall Wortham Curator at the Museum of Fine Arts in Houston. Observed attracted international notice, with reviews in Art in America, New Yorker, Wall Street Journal, Jeu de Paume Museum Magazine, ArtNexus, and Arte al Dia.

Her other publications are Trouble de la Vue (Paris: Toluca Ed., 2003), designed by Pierre Charpin and with text by José Manuel Prieto, and the twenty-year retrospective Fotografías—Photographs 1991-2011 (Buenos Aires: Ed. Larivière, and Barcelona and Mexico City, Ed. RM), issued in 2012, for which Marta Gili, the director of the Musée du Jeu de Paume in Paris, contributed the forward.

Her honors include an artist residency at the Cité internationale des arts, Paris (1995), during which time she worked as a curatorial assistant to photography curator Françoise Reynaud at the Musée Carnavalet and attended the Atelier de Restauration des Photographies, directed by Anne Cartier Bresson; the Rockefeller Foundation Artist Grant; the Romeo Martinez Photography Prize; and the Young Iberoamerican Creators Prize (Photography) for her series The Lost Steps (1996). The growing recognition of the importance of her oeuvre and methodology has also led to a number of guest lectureships, including at The Getty Research Institute in Los Angeles; El Museo del Barrio, Parsons The New School for Design, Hunter College, New York University, New York Photo Festival, and School of Visual Arts, all in New York City; Phoenix Art Museum; Syracuse University; Museo de Arte Moderno, Mexico; Itau Cultural, São Paulo; the Center for Contemporary Studies at the University of Barcelona; and MALI.