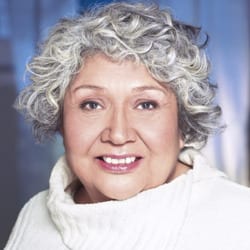 Muriel Miguel of the Kuna and Rappahannock nations, is a founding member and Artistic Director of Spiderwoman Theater, the longest running Native American women’s theater company in North America. She has directed and co-written all of Spiderwoman’s shows since their first show, Women in Violence in 1976. They have produced over twenty original works for the theatre.

She grew up performing in Medicine Shows with her family and as a teenager was the co- founder of the Little Eagles, a group that is still active in New York City and is now known as the Thunderbird American Indian Dancers.

Muriel studied modern dance with Alwin Nickolai, Erick Hawkins and Jean Erdman. She was an original member of Joseph Chaikin’s Open Theater where she performed in the groundbreaking works: Terminal, The Serpent, Mere Ubu and Viet Rock.

She is a choreographer, director and actor. She has choreographed Throw Away Kids and She Knew She Was She for the Aboriginal Dance Program at the Banff Centre. She directed The Scrubbing Project with Turtle Gals Performance Ensemble and Evening in Paris with Raven Spirit Dance Company. She has been a dramaturge with Native Earth Performing Arts’ annual Weesageechak Begins to Dance Festival. As an actor, she was the Mary Deity in the off- Broadway hit, Taylor Mac’s Lily’s Revenge. She created the role of Philomena Moosetail in The Rez Sisters, by Tomson Highway, a play that is a seminal work in the development of a First Nations play repertory in Canada. She played Aunt Shadie in The Unnatural and Accidental Women by Marie Clements and Spirit Woman in BONES: An Aboriginal Dance Opera. She has created one woman shows Hot’ N’ Soft, Trail of the Otter and most recently Red Mother. Her latest project is Material Witness, which explores violence and healing in the lives of Indigenous women in rural and urban communities in the United States and Canada.

Muriel has been awarded an honorary Doctorate in Fine Arts from Miami University in Oxford, OH, home of the Native American Women Playwrights Archives. She was awarded a Rauschenberg Residency in 2015 and is a member of the National Theater Conference. She was selected for the Native and Hawaiian Women of Hope poster by Bread and Roses International Union’s Bread and Roses Center and in 2003 was the recipient of the first Lipinsky Residency (feminist-in-residence) at San Diego State University Women’s Studies Department. She has received many awards as a member of Spiderwoman Theater. The Smithsonian Institution’s Museum of the American Indian presented a retrospective exhibit, New Tribe, New York honoring Spiderwoman Theater’s years of work; a Lifetime Achievement Award from the Women’s Caucus for Art and the Otto René Castillo Award for Political Theatre. Spiderwoman Theater received the first Honoring the Spirit Award for Arts and Entertainment from the American Indian Community House where Muriel sits on the Board of Directors.

Muriel was an Assistant Professor of Drama at Bard College. She teaches and directs a yearly production at the Centre for Indigenous Theatre (CIT) and is also Program Director for CIT’s three week summer intensive. She is a pioneer in the development of an Indigenous performance methodology and is active in the training of Indigenous actors and dancers in this culturally based method. She was a Program Director for the Aboriginal Dance Program at The Banff Centre and an instructor there for seven years. Muriel has lectured with Muriel Miguel: A Retrospective and facilitated Storyweaving Workshops in conservatories and universities in the US, Canada and Europe.

Muriel’s latest work, is directing the Off-Broadway premiere of Spiderwoman Theater and Aanmitaagzi’s MATERIAL WITNESS at La MaMa Experimental Theatre Club. MATERIAL WITNESS is about Indigenous women who have experienced domestic abuse and other violence but have moved to the other side; they are stories full of hope and humor. Spiderwoman Theater is celebrating its 40th Anniversary with this production, which is a spiritual successor to their first show WOMEN IN VIOLENCE.