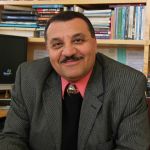 Nezar AlSayyad is an urbanist and a public intellectual.  His scholarship, teaching, and practice demonstrate a wide and diverse range of interests and expertise.  Educated as an architect, planner, urban designer, and urban historian, AlSayyad’s main focus has been the cross-cultural and comparative understanding of cities in their historical contexts.  In 1988, he co-founded the International Association for the Study of Traditional Environments (IASTE), a scholarly association concerned with the study of tradition in the built environment.  Today he serves as the Association’s President and editor of its journal, Traditional Dwellings and Settlements Review (TDSR).  AlSayyad has consulted for many public agencies and is the recipient of many grants and awards for his research, books, films, and projects.  He also engages in professional practice through his firm, XXA.  AlSayyad is Professor of Architecture and Planning at the University of California, Berkeley, where he currently chairs the university’s Center for Middle Eastern Studies (CMES) and its International and Area Studies Graduate Program. In 2008, the University of California, Berkeley, recognized his achievements with the Distinguished Teaching Award, the highest honor awarded a faculty member by the university.

AlSayyad holds a B.S. in Architectural Engineering and a Diploma in Town Planning from Cairo University, an M.S. in Architecture from the Massachusetts Institute of Technology, and a Ph.D. in Architectural History from UC Berkeley.  He is the author, co-author, editor, and co-editor of books in many fields, some of which have been translated to Arabic, Turkish, and Spanish.  Among these are Dwellings, Settlements and Tradition (1989), Cities and Caliphs (1991), Forms and Dominance (1992), Consuming Tradition, Manufacturing Heritage (2001), Hybrid Urbanism (2001), Muslim Europe or Euro-Islam (2002), Urban Informality (2003), The End of Tradition (2004), Making Cairo Medieval (2005), Cinematic Urbanism (2006), The Fundamentalist City? (2010), and Cairo: Histories of a City (2011).  Additionally, he has written, co-produced, and co-directed two NEA-funded public television documentaries, Virtual Cairo, and At Home with Mother Earth.  His latest book, Traditions, is in press.

Through archival research, fieldwork, and literature review, AlSayyad’s Guggenheim Fellowship project will explore the development of human settlements on the Nile from Burundi to Egypt, treating the river both as the stage upon which significant events occurred and as an agent in its own unfolding history.  The project will culminate in a book, Nile: Urban histories on the Banks of a River, examining the intersection of natural forces with human encounters and interventions around its waters.  This project will engage with the built environment as the primary unit of analysis, focusing on urban space by anchoring specific events in cities along the Nile, and taking readers on a series of journeys of human enterprise from the river’s sources to the Mediterranean Sea.