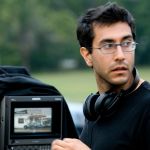 Born in North Carolina in 1975 and raised there, Ramin Bahrani is a writer, director, and editor of feature fiction films who received his B.A. in film studies from Columbia University in New York City. He made several short films culminating in Backgammon (1998) before moving to his parents’ homeland of Iran for three years where he made his student thesis film, Strangers (2000). Mr. Bahrani then spent some time in Paris before returning to the States to begin work on his first feature film, Man Push Cart.

Ramin Bahrani’s second film, Chop Shop (2007), premiered at the 2007 Cannes International Film Festival, and then screened at Toronto Film Festival (2007) and the Berlin Film Festival (2008). Chop Shop was released worldwide to universal critical acclaim, winning several prizes including the Acura “Someone to Watch” Independent Spirit Award (2008) for Mr. Bahrani. In 2009 the film was nominated for two Independent Spirit Awards, including Best Director. Chop Shop was on countless top ten lists for 2008, including those of critics Leonard Maltin and again Roger Ebert, who hailed it as a “Masterpiece!”

In 2008 Mr. Bahrani premiered his third film, Goodbye Solo, as an official selection of the Venice Film Festival and won the FIPRESCI international critics prize for Best Film. The film then screened at the Toronto Film Festival. Goodbye Solo will be released theatrically in the United States by Roadside Attractions in the spring of 2009 and globally shortly thereafter.

Ramin Bahrani will be the subject of several prestigious international retrospectives in 2009, including  ones at  MoMA in New York City, Harvard University, and the La Rochelle Film Festival in France.

Follow the links below to view Ramin Bahrani’s film trailers:

Follow the links to read the reviews of Ramin Bahrani’s film Goodbye Solo:

A O Scott’s review of Goodbye Solo in the New York Times.

Follow this link to view a conversation about the film “Goodbye Solo” with Souleymane Sy Savane, Ramin Bahrani and Red West on Charlie Rose.