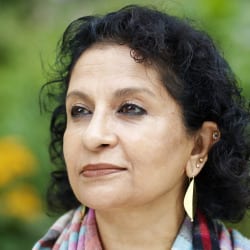 RANEE RAMASWAMY founded Ragamala Dance Company in 1992 and currently serves as Co-Artistic Director, Choreographer, and Principal Dancer along with her creative partner (and daughter) Aparna Ramaswamy. As dancemakers and performers, their creative vision merges the rich traditions and deep philosophical roots of their Indian heritage with their hybridic perspective as first generation Indian-Americans.

Ranee’s work has merged the classical language of Bharatanatyam with a contemporary Western aesthetic to create timeless pieces that freely move between the past and the present. Her training in Bharatanatyam under iconic dancer/choreographer Alarmél Valli in Chennai, India, is the bedrock of her creative aesthetic.

Ranee currently serves on the National Council on the Arts, appointed by President Barack Obama.

Most recently, she and Aparna were selected as Research Fellows by the Rockefeller Foundation Bellagio Center (Italy).

In addition to their creative work, Ranee and Aparna are committed to inspiring a new generation to think and act innovatively, sparking conversations that articulate new possibilities for cultural hybridity in the 21st century. They have served as guest lecturers at colleges and universities throughout the U.S., and have been featured speakers and panelists for such forums as the Dance/USA National Conference, the International Festival of Arts & Ideas, and the Body Voices: Reimagining Culture, Community, and Politics conference hosted by NYU Abu Dhabi. Through the Ragamala School in Minneapolis, Ranee and Aparna have educated hundreds of students in the classical dance form of Bharatanatyam.