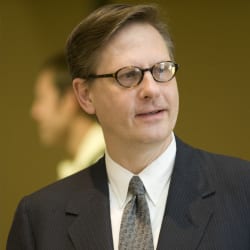 Robert Spoo is an endowed professor in The University of Tulsa College of Law and has taught a range of subjects that include copyright law, law and literature, and constitutional law. His research explores relationships among modern literature, copyright law and its history, and conceptions of the public domain. Recently, he has examined the system of informal norms adopted by nineteenth- and twentieth-century American publishers in response to the absence of U.S. copyright protection for foreign authors. His research on this subject appeared in Without Copyrights: Piracy, Publishing, and the Public Domain (Oxford UP, 2013; paper 2016).

Early in his academic career, Spoo was a tenured English professor and Editor of the James Joyce Quarterly. His first book, James Joyce and the Language of History: Dedalus’s Nightmare (Oxford UP, 1994), along with his scholarly edition of H.D.’s novel Asphodel (Duke UP, 1992) and his co-edited volumes, Ezra and Dorothy Pound: Letters in Captivity, 1945-1946 (Oxford UP, 1998) and Ezra Pound and Margaret Cravens: A Tragic Friendship, 1910-1912 (Duke UP, 1988), established him as a prominent scholar of British, Irish, and American modernism. He is currently one of the editors of an Oxford University Press project to collect, annotate, and publish the unpublished letters (nearly 2,000) of James Joyce.

In the midst of his career as a literature scholar, Spoo encountered copyright law. To his surprise, he found that the estates of not a few modern writers used the copyrights they controlled to discourage the work of scholars, students, and creative users. He discovered, in effect, that his chosen field was owned, as intellectual property, by others, whereupon he took a leave from his academic position to study law. After earning his J.D., he served as law clerk to the Honorable Sonia Sotomayor, then on the U.S. Court of Appeals for the Second Circuit, and went on to practice law with firms in New York, Tulsa, and San Francisco. Much of his legal practice has been devoted to assisting scholars, writers, and others with their copyright needs.
In 2008, he returned from law practice to be a fulltime faculty member at The University of Tulsa College of Law, where he teaches in the J.D. program, the University’s undergraduate core curriculum, and the Law College’s undergraduate program in Law, Policy, and Society.

Spoo’s current book project, Modernism and the Law, which will benefit from the support of a Guggenheim Fellowship, is a study of the impact of various legal regimes on Anglo-American literary modernism. Each chapter will isolate specific areas of law and show the shaping, deforming, sometimes liberating roles they played in transatlantic modernist culture. The book will focus on the laws governing obscenity, blackmail, defamation, privacy, publicity, copyright, and authors’ moral rights.

Spoo earned his B.A. from Lawrence University; his M.A. and Ph.D. from Princeton University; and his J.D. from the Yale Law School.