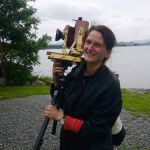 “Sharon Harper’s work jettisons this idea of the photograph as a seamless window to reality and replaces it with a magic mirror, a transformative surface that is capable of making the invisible visible and the intangible tactile.” —Stephen C. Pinson, Robert B. Menschel Curator of Photography and Assistant Director, Arts, Prints and Photographs, New York Public Library

Harper’s photographic interests lie at the intersection of technology and perception. Her experimental work uses photography and video to create poetic connections between ourselves and the environment.

Harper’s pictures challenge the seamless surface of photographs and shift our attention to a relationship between the camera and the way we perceive photographs. Throughout her work the camera impacts the record it keeps, which is ultimately a visual dialogue transcribed by the image-maker and the camera together. This relationship is a metaphor for the myriad ways technology and art affect and ultimately facilitate our understanding of our surroundings.

Harper’s contemporary art practice expands notions of photography and pushes uses of photography into the realm of poetry. Artist and Professor Catherine Wagner says, “From Above and Below [Radius, 2012] reminds us of the necessity to engage in the act of ‘wonder.’ Sharon Harper’s photographs of constructed observations read like poems of knowledge.”

Sharon Harper was born and raised in Stamford, Connecticut. She received her M.F.A. in Photography from School of Visual Arts in 1997. Harper’s photographs are in the permanent collections at the Museum of Modern Art and Whitney Museum of American Art in New York City; The Albright-Knox Art Gallery in Buffalo, New York; the Museum of Fine Arts, Houston; the Harvard Art Museums; the Nelson-Atkins Museum, Kansas City, Missouri; and The New York Public Library, among other institutions. She has received numerous artist-in-residence fellowships, including at the Headlands Center for the Arts, Yaddo, the MacDowell Colony, Ucross Foundation, Vermont Studio Center, and most recently Halsnøy Kloster, Norway.  From Above and Below was the first monograph of her work.  Harper’s work has been exhibited internationally and is represented by Galerie Stefan Roepke, Cologne, and Rick Wester Fine Art, New York. She lives in Somerville, Massachusetts, and is currently Associate Professor, Harvard University, Visual and Environmental Studies.