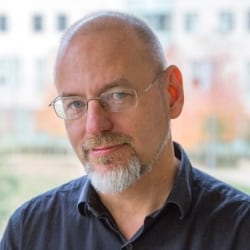 Stefan Helmreich is Elting E. Morison Professor of Anthropology at MIT. His research has centered on how biologists think through the limits of “life” as a category of analysis, a matter he has taken up in three books: Alien Ocean: Anthropological Voyages in Microbial Seas (University of California Press, 2009), an ethnographic study of how marine microbiologists engage with debates about the origin of life, climate change, property in the ocean commons, and the possibility of life on other worlds; Silicon Second Nature: Culturing Artificial Life in a Digital World (University of California Press, 1998), an ethnography of computer modeling in the life sciences; and, most recently, Sounding the Limits of Life: Essays in the Anthropology of Biology and Beyond (Princeton University Press, 2016), a collection that asks after changing definitions of “life,” “water,” and “sound” in the natural and engineering sciences.

With the Guggenheim, Helmreich will complete a manuscript tentatively entitled The Book of Waves: An Anthropologist Reads Physical Oceanography, offering an ethnographic account of how scientists measure, model, and monitor ocean waves in an era of climate change. Drawing on interviews and participant-observation at research centers in the U.S., Europe, Australia, and elsewhere, Helmreich will examine how oceanographers, coastal engineers, and mathematicians grapple with waves as entities at once manifestly material and analytically abstract. He will ask how waves, known through fieldwork at sea, modeling in the lab, and, increasingly, computer simulation, might be read as media: material forms that relay information — oceanic, climatic, anthropogenic, political — to scientists and their publics.