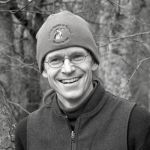 Thor Hanson was born and raised in the Pacific Northwest, where he now lives on an island with his wife and son.  He caught his first salmon at age four, and often collected a wide array of temporary summertime pets, from caterpillars and tadpoles to garter snakes, hermit crabs, and tree frogs.  His early interest in the natural world steered him towards a career in conservation biology.  Thor received his bachelor’s degree from the University of Redlands, his master’s from the University of Vermont’s Field Naturalist Program, and his doctorate in a joint program through the University of Idaho and the Centro Agronómico Tropical de Investigación y Enseñanza, Costa Rica.

Thor’s research and conservation activities have taken him around the globe.  He has studied Central American trees and songbirds, nest predation in Tanzania, prairie plants in Idaho, and the grisly feeding habits of African vultures.  He served as a U.S. Peace Corps volunteer in Uganda, where he helped establish the mountain gorilla tourism program in Bwindi Impenetrable National Park, and he has also helped manage a brown bear tourism project for the U.S. Forest Service in Alaska.  Thor often works at the interface between natural and human systems, and has published his research in a wide range of journals, including Conservation Biology, Bioscience, Molecular Ecology, Wilson Journal of Ornithology, Neotropical Ornithology, Journal of African Ecology, Environmental Conservation, and Biotropica.

Thor believes strongly in the storytelling of science, the importance of taking intriguing ideas and discoveries beyond the realm of peer review.  That belief led him to start writing books aimed at a wide audience.  His first effort, The Impenetrable Forest, described two years working with mountain gorillas in Uganda, and earned the 2008 USA Book News Award for Nature Writing.  His second book, Feathers: The Evolution of a Natural Miracle, won the 2013 John Burroughs Medal and was nominated for the Samuel Johnson Prize.  It also won the 2012 A.A.A./Subaru SB&F Prize and a Pacific Northwest Booksellers Association Award, and was a finalist for the Washington State Book Award.  Thor’s many media appearances have included NPR’s Fresh Air, PRI’s The World, and The Current on CBC.  He has also penned dozens of popular articles and essays for periodicals ranging from Audubon and BBC Wildlife to the Los Angeles Times, Boston Globe, and Huffington Post.

Thor plans to devote his Guggenheim Fellowship to his third book, The Triumph of Seeds.  It explores the fascinating natural and cultural history of these humble, essential objects—why seeds are so successful in nature, and why we are so utterly dependent upon them. The story travels from backyard gardens to carboniferous swamps, discovering along the way what Almond Joy candy bars have in common with fracking, why rats can chew through concrete, and how a dash of Tabasco sauce can help explain the evolution of fungi, the taste buds of mockingbirds, and the failings of Christopher Columbus.  The Triumph of Seeds will be published by Basic Books.