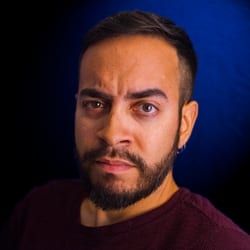 Caballero’s directorial debut came in the form of a feature length autobiographical documentary entitled AMERICAN DREAMS DEFERRED, which focused on the diverse health, financial, and social difficulties facing his Puerto Rican-American family. This cinema-verité film was selected for the NALIP (National Association of Latino Independent Producers) Latino Producers Academy, eventually receiving the first annual HBO-NALIP Documentary grant. Five years after its conception, it went on to have a national television premiere on PBS on December, 2012. Post-premiere, he has screened the documentary at over 40 American universities.

In 2010, the Apollo Theater commissioned Caballero to create SPEAK! SO THE WORLD WILL LISTEN! UGANDA, a multimedia advocacy concert for 20 musicians. Shot on location in Uganda, the project features the audio testimony of war orphans and gay rights activists, blending music, visuals, and documentary, which later premiered at the Apollo. In 2012, he completed SEED STORY, a macro short film featuring a cast of hundreds of one-inch tall plastic hand-painted figures, which debuted the following year at the Slamdance Film Festival, and later became a Vimeo Staff Pick. In 2013, Caballero was selected for the Aljira Emerge program (in partnership with Creative Capital), a strategic career management and exhibition platform for emerging artists. Later that year, he gave two keynote speeches at the annual Bill Gates Leadership Conferences in Washington, DC and San Jose, CA as an ‘alumni guest-of-honor.’

Working in the field of 3D printed short films, his recent achievements include GRAN’PA KNOWS BEST, an interstitial series based on his short film, HOW YOU DOIN’, BOY?, which was licensed by HBO LATINO in 2015. Two seasons of the show are currently viewable on HBO GO, HBO NOW, and HBO ON DEMAND. In September, 2016, Univision debuted his latest web-series, DREAMER GENERATION, which features the stories of members of the Dreamers’ Movement, shot using 3D scanned/printed miniatures. In 2017, Caballero’s latest short film, VICTOR AND ISOLINA, debuted at the prestigious Sundance Film Festival, and the Museum of Modern Art (Documentary Fortnight).

Caballero’s latest web-series STORYBORED USA, a web-series aimed at empowering diverse young people to tell their stories through creative arts and media, launched in January 2017. The show features 3D printed miniatures of Caballero as the show’s host, and was funded by Latino Public Broadcasting. Recently, in November 2017 Caballero was one of ten filmmakers selected for the SUNDANCE NEW VOICES LAB, held in Los Angeles, California.

William D. Caballero is a multimedia filmmaker and writer that tells big stories using small figures. His 3D printed macro-protagonists examine American, Latino, gender/sexuality, and existential identity, becoming hosts to discussions on issues far larger than they. This is sometimes accomplished with humor and other times through somber introspection, allowing each new miniature world to take on new traits across many eclectic genres, using the medium of film and video.

His creative mantra is “empower, enlighten, and express”, and it underlies his desire to spread the gift of creativity amongst diverse people, liberating them from the oppression of mainstream tastes and values. Caballero’s video work champions a new reality, where brown-skinned nerds and LGBT geeks feel empowered to tell their own stories using their own voice. After all, if we don’t tell our own stories, then who will?