A Conversation with Kevin Brockmeier 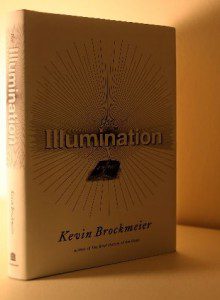 What are you currently reading, and what’s next on your list?

I just finished Rule of the Bone by Russell Banks, and waiting for me at the bookstore is Maureen McHugh’s After the Apocalypse. Those are only two passing titles, though, from a swiftly flowing river. It might be more revealing if I told you about the happiest discoveries I’ve made this year.

First is the Israeli writer Alex Epstein, two of whose collections were recently translated into English by the poet Becka Mara McKay and published by Clockroot Press: Blue Has No South and Lunar Savings Time. If you took the short forms and odd structural techniques of Lydia Davis and wedded them to the fantastic impulses of Ray Bradbury, you would get something like these books, which together contain some two hundred strange, pliant, elliptical, yet surprisingly tender treatments of angels, rain, lullabies, minotaurs, moons, zen masters, literature, and time travel. A glimpse at the titles should be enough to tell you whether they are the kind of stories you would enjoy: “On the Mourning Customs of Elephants,” “The Number of Steps on the Moon,” “An Instruction Manual for a Rented Time Machine,” “The Angel Who Photographed God.”

Second is the Czech writer Michal Ajvaz, two of whose novels were recently published by Dalkey Archive Press, both of them fantasies of the kind that upend rules so fundamental you might have forgotten they were rules at all. The Other City is about a man who discovers a book written in an enigmatic foreign script and soon finds an other-world of lost souls, talking animals, and shadowy doorways seeping through the structures of his city. The Golden Age is about a visitor to a small Atlantic island where the people yield themselves up to the forces of flux, so that every feature of their lives— their families, their language, their religion—is constantly turning into something else. Ajvaz’s sentences are filled with unexpected slues and inversions, and you sense that he could try writing a work of suburban domestic realism, and it would still brim with uncanny meanings, oceans of the bizarre and the mysterious expressing their way through the dishes and the wallpaper, the throw pillows and the neckties.

As for the near future, the books I’m most eager to read in the first half of 2012 are The Thorn and the Blossom by Theodora Goss, Angelmaker by Nick Harkaway, Varamo by César Aira, Proud Beggars by Albert Cossery, Harlequin’s Millions by Bohumil Hrabal, and Joseph Walser’s Machine by Gonçalo M. Tavares.

As a full-time writer, what might a typical day look like for you? Are there particular routines or rituals that you find important to maintain?

When I’m home, presuming I’m healthy, I try to devote as much of the day to writing as I can. I typically work from nine-thirty or ten in the morning to at least dinnertime, but I’m often more productive during my supposed post-work tinkering time than I am during my proper working day. The truth is that, hour by hour, I get very little done, but there are an awful lot of hours wrapped up in every story I write. The only thing I can say I’ve learned for certain is that the more time I’m able to spend writing, the more I’ll eventually, slowly, painstakingly, accomplish. I’ve spoken elsewhere about my working methods, how I broach my sentences one tiny piece at a time, termiting away at them until I’m satisfied that they present the right effect. I’m fairly certain that, as a reader, I can tell when a writer is investigating words for their insinuations, their dim traces of other times and places, trying to fit each unusual shape properly to the next, and I spend my days trying to do the same.

Can you talk a little bit about your process when you are working on a book? What inspires you to first begin a story? How do you know when it might become a whole novel, and how does that progress for you? Do you revise and edit much as you are writing?

For me, the introductory features of a story, if not its most essential elements, are its shape, its tone, and what I’ll call its presiding notion. A story’s presiding notion is the idea at its center: a ceiling that flattens an entire community, a coat that reproduces people’s prayers on slips of paper, a city of the dead but not yet forgotten, a world in which pain manifests itself as light—anything, so long as it arrives with enough potency to make me take notice and carries a certain freight of feeling and expectation. A story’s tone is inseparable from the rhythms and melodies and stillnesses and promises and fluctuations and mannerisms of its early sentences. As for its shape, very rarely do I begin writing a story without knowing roughly how long it will be, how many divisions it will have, and how its sections will rest alongside each other. I’m not one of those writers whose stories surprise him by turning into novels, because that would rid them of their shape, and therefore of their basic foundation. That’s not to say that my novels aren’t structured around—and sometimes even out of—individual stories. Frequently I’ll begin a novel with a section that can serve double-duty as a short story, which is my way of trying to satisfy the terms of some smaller introductory structure in order to ease myself into the larger continuing structure of the book.
More broadly, I can say that before I begin writing a book, and whenever I’m not actually sitting at my computer, I might puzzle through the various features of the story I want to tell, but when I’m actually writing, I end up concentrating extremely hard on the sentences I’m piecing together. Every one of them presents its own dilemmas, and I often find it difficult to bend them to their purpose. In fact, the effort to satisfy whatever demands each sentence seems to be making of me, and to follow the hints it offers about what’s coming next, frequently dictates the direction of the story I’m imagining.

What typically surrounds you while you are writing? Do you listen to music, look at particular images, or feel there is something especially important to immerse yourself in as you work?

Quiet—that’s all. I want as few distractions as possible.

Do you ever get writer’s block? How do you deal with it?

I write very, very slowly—so slowly that I’m not sure how easy it would be for me to distinguish writer’s block, whose most salient feature, as I understand it, is the long gap between one story and another, from my actual process of writing, whose most salient feature is the long gap between one sentence and another. I’ve certainly experienced times when I wasn’t writing at all, but I think that’s only natural. It can be productive for a writer to let his mind lie fallow for a while, and I believe the best thing to do during those periods is read, tinker with the stories you’ve already written, and work on other, more personal, less rigorous forms of writing, like letters and journal entries.

This spring you’ll be teaching at the Writers’ Workshop at the University of Iowa. Is there a particular topic you find yourself revisiting when you teach?

All of the teachers at Iowa conduct two courses a semester: a workshop in either fiction or poetry and a seminar of their own devising. This will be my third stint teaching there and the third time I’ve run my seminar as a second, more specialized workshop, one for students who want to concentrate on forms of writing that don’t necessarily fit comfortably into the standard MFA curriculum—children’s and young adult fiction previously, but this time science fiction and fantasy.

You’ve been on tour for your newest novel The Illumination for some time, and you’re now back at home in Arkansas. What do you find most special about where you call home?

Little Rock is much more eccentric than people who don’t live here might imagine. I like being in a place that’s overlaid with so many years of my own memories; the fact that I grew up here, and have remained here, means that there are street corners and parks and buildings that reveal layer after layer of associations each time I see them. Aside from that, I love the landscape of the city—a wonderful collision of the Texas flatlands, the Mississippi Delta, and the Ozark mountains—and the way the roads bend around the curves of hills and take unusual right-angle turns at stoplights, and the color of the trees and houses when the sky clears following a hard rain, and the general amiability of people in shops and on sidewalks, and the way the most obscure neighborhood political squabbles are played out on bumperstickers, and of course my own personal selection of favorite bookstores, restaurants, and movie theaters.

In an illustrated interview you did with The Oxford American earlier this year, there are some great photos of clocks around your house. Do you collect them? Is there something else that you find you (consciously or unconsciously) collect?

The spiral clock whose photo accompanies that interview might be the single most beautiful object in my entire home, but if I collect clocks, it’s only by happenstance—because I needed a few and decided they might as well be interesting as well as functional. I also own an awful lot of books and CDs and DVDs, but the force at work there is a reader’s impulse, or a listener’s and viewer’s impulse, rather than a collector’s impulse. When I was in the second grade, though, I had an extensive pencil collection, which I accumulated by thievery. My philosophy was that as soon as a pencil fell to the floor, it could be considered “lost” and therefore up for grabs. I remember several of the other kids in my class complaining one day to our teacher, Miss Jordan, that they didn’t have a pencil to write with, and someone said, “That’s because Kevin has them all,” and she made me open the pocket of my book bag, where I had squirreled away literally hundreds of them.

How have your personal experiences informed your writing? Does an experience come to mind that has had particular influence in shaping a character or an event in one of your novels?

I feel as if I reveal a lot of myself in my fiction. Very little of it is truly autobiographical, but frequently I find myself taking aspects of my mind and history, my sentiments, my personal dilemmas, the little wisdoms I imagine I’ve gathered—all the basic circumstances of my life, really—and reconstituting them as symbols and metaphors. That said, the story “Andrea Is Changing Her Name,” while formally very strange, edges closer to autobiography than anything else I’ve written, which is to say that it’s a four-part mixture of authentic fact, fact reshaped for the purposes of fiction, half-reliable speculation, and outright invention. I had already made several attempts to write that particular story before I stumbled upon its peculiar point-of-view approach—a first-person narrative, but one that freely (and almost exclusively) adopts the perspective of a third-person character. It was this method that gave me the license I needed to tell a story so intimate to me, one in which I tried to reconstruct a certain period of my life, when I was eighteen and wanted nothing to change and knew that at any second it all would, and to inhabit the mind of someone I loved.