An interview with Thomas Kühne 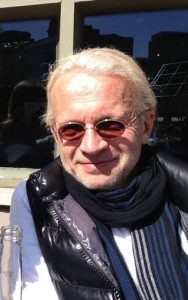 For Thomas Kühne, an internationally recognized expert on the Holocaust and the Third Reich, his latest publication, Globalizing Beauty: Consumerism and Body Aesthetics in the Twentieth Century, edited with Hartmut Berghoff and supported in part by his Guggenheim Fellowship, might seem a sharp departure from his earlier studies. But as Thomas explains, there is indeed a common thread running through his work.

Thomas, you were born and educated in Germany, completing your undergraduate and doctoral degrees at the University of Tübingen, and you taught at various German universities before becoming a permanent resident of the United States. Having been involved in academia on both sides of the Atlantic, do you think your educational experiences in Germany affected your research focus and approach to history in a way that wouldn’t be possible in this country?

I wouldn’t say my German education affected my research focus and approach to history in a way that would not be possible in the U.S., given the academic diversity in America. And then, in the fields of history I have studied when I was trained, modern German history and its dark sides, have always been subjects of consistent academic exchange over the Atlantic. In the 1980s, when I was trained, German historians, more than their American colleagues, were used to stressing German peculiarities to explain the disasters in the first half of the twentieth century. But even this does not mark a sharp difference. What matters more than approaches to history is the style of academic training and academic communication. The academic training in Germany comes with much less guidance and advising than in America, especially on the graduate level, so that students need to find their way—and their topics, their approaches to history, their methods—by themselves, more than they have to in America. That is now about to change in Germany, but in the 1980s and 1990s, when I was trained, it did matter. An even bigger difference marks the style of academic disputes. The German academic culture loves quite confrontational discussions, the open and direct exchange of thoughts and mutual criticism, which would be considered rude in America. I couldn’t say which style is better—I enjoy the experience of the contrast.

In 2003, the Institute for Advanced Study in Princeton awarded you a yearlong membership, and the following year you accepted an appointment as Strassler Family Chair in the Study of Holocaust History at Clark University. How did your transition from Germany to the United States impact your research?

I think the most important impact resulted from the diversity in America, in the society at large and in the academia. My colleagues and students at Clark, for instance, come from all parts of the world and all kinds of cultural backgrounds. This would have been unthinkable in Germany when I was trained, and it is still unthinkable today. Look at my major field, Holocaust history. Holocaust history in Germany is, or was (when I was trained), almost identical with Third Reich history, the history of the perpetrators and bystanders, but not much of the history of the Jewish victims. This is entirely different in America. Although my research still focuses on the perpetrators’ perspective, I have learned to look at them from rather different points of view, including those of the victims. More important, the daily confrontation with enormously diverse perspectives in America has influenced my research prospects. The project on globalizing beauty reflects this.

Obviously, as Strassler Family Chair, Holocaust studies are central to your academic work.  In this age of almost instantaneous access to information, some people still insist the Holocaust never happened. Do you think such insistence in the face of all facts is sincere, or a matter of political calculation?  Should the deniers be ignored, or is there something to be gained from engaging them? In terms of academic freedom, what do you think of laws that make Holocaust denial illegal?

I have a very ambivalent attitude toward this. On the one hand, I think a democratic society should be able to deal with, contain, or fight, deniers with arguments, not laws—arguments that may not convince the deniers but ensure that the deniers remain an insignificant minority. Unfortunately, it is not guaranteed that it works that way. By granting academic freedom, or freedom of speech, to deniers, democratic societies honor them, grant them respectability, that is. Or it may be seen that way. That is why eventually, again, much to my regret, we need laws that make Holocaust denial illegal. Then, there is also another, maybe even stronger, reason for such laws, the dignity of the victims of the Holocaust. Holocaust denial is a slap in their faces. In other words: Academic freedom is a precious value but not the only one that needs to be defended.

Globalizing Beauty: Consumerism and Body Aesthetics in the Twentieth Century, which you edited with Hartmut Berghoff and was supported in part by your Guggenheim Fellowship, was just published in September by Palgrave Macmillan.  A glance at its table of contents might lead a person to think this anthology is a work of cultural anthropology. Is it as sharp a departure from your previous work as it seems? What interested you about this topic, and what do you hope readers will take away from it?

Well, this particular volume is the result of a fruitful collaboration with Hartmut Berghoff who specializes in the history of economics, of entrepeneurs, and of consumerism. I am not sure whether he would want to consider our book as one on cultural anthropology. But your impression is certainly true for my part. But I don’t it see it as a departure from my previous work. I have always tried to learn from cultural anthropologists. What both disciplines, anthropology and mine, have in common is the interest in the plurality of cultures. Of course, as a historian I am interested in the historical dimension of this plurality, and so this book tries to transmit that different societies and different individuals around the world have become more and more fascinated with body aesthetics but have expressed this fascination in rather different ways. I hope the book shows that one has to take this fascination, and the individuals that pursue it, seriously instead of just lamenting the superficiality of beauty cultures and practices of beautification. These practices are meaningful to those who subscribe to them. The multitude of these meanings is the subject of the book.

During your career, in addition to topics in Globalizing Beauty, you’ve explored the political traditions of Central Europe, male bonding among German soldiers, and genocide. Is there a common thread running through your work?  What’s next?

I would want to claim that there is a common thread through the various departments of my scholarly work. I am dedicated to a broad conception of cultural history. I explore how symbolic and emotional orders are related to political institutions and social differences (and identities), how the latter affect the previous and vice versa. A crucial question of my studies is how individuals, groups, and societies have worked on overcoming dissent, how they have established (and restricted) concepts, myths, and practices of consensus, agreement, harmony. For instance, my dissertation showed that the Prussian three-class electoral law in Wilhelmine Germany around 1900, although condemned by urban leftists as unjust, built on and reinforced age-old models of political consensus embedded in social hierarchy that remained quite strong in the countryside.  My books on Hitler’s soldiers and on the Nazi society explore how the comradeship and other concepts of belonging allowed Germans to connect different and in fact opposing moral and emotional worlds—brutality and terror against alleged foes, and altruism, tenderness, and charity in the in-group of friends, comrades, fellow citizens. And eventually the interest in the historical change of social identity and social harmony is what drives my project on body aesthetics in the modern world. Beauty in itself is a category of difference, and as such it has always been linked to other categories of difference—the good, the strong, the wealthy, the healthy, and the white people. Whether gendered, racialized, or commoditized, beauty has been a tool of social distinction and a subject of controversy. On the other hand, modern beauty cultures pretend, and promise, to overcome existing social, racial, sexual, and regional differences and hierarchies. This is the particular modern, democratic, as well as cosmopolitan feature of body aesthetics in a globalized world: the claim that everyone can become beautiful and thus join, indeed contribute to establishing, an aestheticized global society that radiates social harmony rather than social conflict. Analyzing the ways body aesthetics are fueled by utopias of democratization and allures of cosmopolitanism, my project intertwines issues of self and society, body and visual culture, regional particularities and globalization. Of course, my project, which will eventually lead to a monograph, won’t cover all parts of the world. But even exploring only some of them exemplarily may keep me busy for a while yet, although hopefully not too long.