Behind the Lens with Milagros de la Torre 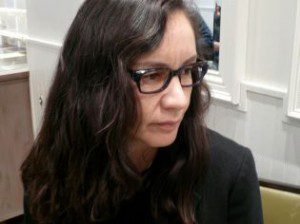 The gifted Peruvian photographer discusses her thought-provoking images, truly unique methodology, and the importance of the interplay between the photographer, photograph, and viewer in the creation of her art.

Milagros, unlike a lot of photographers, you won recognition for your work at a very early age, with the Centre Nationale de la Photographie in Paris mounting your first solo show, Sous le soleil noir (Under the Black Sun), in 1993 when you were only twenty-eight.  Please describe the method you used to produce those idiosyncratic images, and your purpose in creating them.

When I started doing the research for Under the Black Sun, I had just finished my B.A. in photographic arts in London and was intrigued with the kind of works being produced in Latin America at that moment. I had just absorbed the history of visual arts within the European and American canons, so I was eager to find out about new artists and photographers but also about nineteenth-century and early twentieth-century works related to the image.

I had read what there was about the Cuzco school of photography and since my family is originally from Cuzco, I decided to go and work in that Andean city.

Under the Black Sun is one of my few projects dealing with portraiture. It is based on the minutero, the street photographers whose main service is providing common IDs or passport photos to be used in official documents. They tend to ply their services near the town hall, on the main square.

I had observed their rudimentary and fascinating process, which stood in strong contrast to the advanced photographic techniques taught at college, so this was intriguing.

Using a box camera, they shoot directly onto photographic paper that has been roughly torn by hand to approximate the size of a passport photo. After the photograph has been taken, the exposed paper is developed in the camera itself with the aid of developer and diluted fixer stored in small recycled tins; the minutero typically uses sleeves recycled from an old jacket attached to the camera to access the inside of the box camera to develop the images.

As the paper negative is removed to dry in the intense mountain sunlight, a layer of Mercurochrome (merbromin) is applied to the skin in the image. This negative with red retouching is then re-photographed with the same camera, in order to produce, through the same process, a positive, or common ID photo, which can be repeated to create as many copies as the client needs.

The innocent retouching lightens the skin of the subject, producing not only a “racial improvement,” but also an aesthetic, economic, and even educational one, given the prevalent belief (probably of colonial origin) that a person with fair skin intrinsically possesses all of these qualities.

I set up my camera in a small square, but only referenced the minutero process halfway and still unresolved, at the negative stage, with the red veil covering the face of the subject.

The history of photographic techniques and your own history and that of your homeland of Peru are very much in evidence in your various series, from Todo queda en familia (It All Stays in the Family) (1994), to Censurados (Censored) (2000), to the more recent Antibalas (Bulletproof) (2008).  How does the subject or theme affect the process you choose?

I tend to spend time putting together different elements (historical, technical, semiotical, which somehow, always lead to the philosophical) related to the idea behind each project, one layer after the other, with the hope that the end result not only makes sense but serves to ignite the viewer’s thought process and imagination. My intention has always been to incorporate implied signs, hoping the viewer would bring his own analysis and paradigms to them. The true work exists in the space between the viewer’s mind and the image confronting him.

Antibalas is a comprehensible succession on my research. The series is comprised of representations of apparently ordinary, everyday pieces of clothing. Suspended in vacant white spaces, depicted in high detail, these well-crafted garments conceal their real purpose, which is to protect the wearer from attack by firearms.

Manufactured in Colombia, but catering to clients as far away as Russia, South Africa and the Persian Gulf, these discreet armored garments are used, as one might expect, by politicians, the rich, and celebrities, but have also been widely adopted by ordinary citizens in violence-plagued nations worldwide.

They seem emblematic of our times, which are characterized by increasing militarization, the mechanics of violence, and a climate of insecurity. I can relate to these problems because of my upbringing in Peru, but unfortunately they have global relevance today.

I think a lot of people would be surprised to know the depth of the research you undertake before even picking up your camera.  Your series Recién nacido (Newborn) (2001) is a particularly striking case in point.  How did you determine the precise focus for these images that replicate how a newborn sees in its first days of life?

My main interest is the concept behind the image, a focus that is indeed mercurial but one that grows out of my own inquisitiveness and sense of skepticism.

As I reassess the rapid and constantly changing signification of the photographic image, it becomes evident that the analysis and the deciphering of new codes are essential and unavoidable.  For the first time in the history of art, we are obliged to look at images in ways we have not experienced before.

For Recién nacido, I found myself in the predicament of having to wait nine months before meeting my daughter, eye to eye. That’s when I decided to research the mechanics of one of our most essential of capabilities, that of observance. I started reading about the physical development of sight, delving into books and articles recommended by ophthalmologists and pediatricians.

I found out that a child does not “see” as we adults do until 8 months of age. It was clear that newborns’ first visual encounters and impressions would be easily forgotten; therefore I decided to “register,” as faithfully as possible, the first three days of visual knowledge. I translated depth of field, focus distance, peripheral view, color palette, contrast, according to all the medical specifications, into the language of the camera.

The result were eight images, taken when the newborn concentrated on her first impressions and made an effort in “looking”; for example, when the open sky or the light on the ceiling, a toy rabbit , a bottle of water on the night table, captivated and entranced her.

Ediciones Larivière and Editorial RM have recently published Milagros de la Torre: Fotografías—Photographs, 1991–2011, which presents a gorgeous twenty-year retrospective of your work.  Where do you go from here?  What projects are you currently working on?

I’m preparing a few new series I’ve actually been working on for a long time now.

I am always interested in the relationship between the photographer’s intent, the photograph itself, and the various reactions of viewers to both. It is in that dialogue where images truly “develop,” and it is that exchange that best describes my concept of photography.