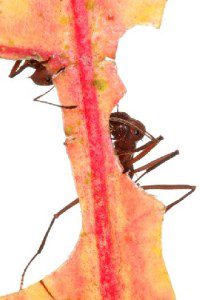 Lying on the rainforest floor, flat on my stomach, looking up through the camera at thousands of leafcutter ants marching inches from my lens, I thank the Guggenheim Foundation for enabling me to be dirty, sweaty, bitten and stung. But I could not be happier. Working with leafcutter ants, whom E. O Wilson calls the “ultimate superorganism,” is a joy, a privilege and always a challenge.

During my fellowship period, I spent seven weeks on the Osa Peninsula in Costa Rica working on my four-part video series. This winter I’ll return to complete the project.

Though I use knowledge hard-gained in the field by eminent biologists such as Mr. Wilson and Mr. Holldobler to better understand the ecology of my subject, I am not filming a nature documentary. The leafcutter ants and I are collaborators in the fullest sense of the word. I bring a shooting script, they bring their preferences; I change my script, and together we create fictional narratives.

What happened on the shoot of Colonize the Earth was typical of the guerrilla filmmaking that results from working with millions of ants. My intention for this video was to highlight the connection between environmental degradation and war. It combined footage of an ant war I filmed with a time-lapse sequence I intended to do of the colony stripping a tree completely bare. The key to shooting this segment was to find a suitable, green tree about my height that the ants would denude. Since leafcutter ants are the largest herbivore in Central America, harvesting a wide variety of plants, I didn’t think that this would be too difficult.

Well, how wrong I was. For two weeks they refused everything I offered. I gave them nearly two dozen plants they are known to like, and even cut large branches from the very tree they were actively harvesting, but they blithely marched past my gifts as if they were chopped liver. Out of complete desperation, not knowing what to do next, I gave them this crazy, improbable plant I had never seen them take. It was spotted and striped and contained every color of the rainbow. These striking and joyous leaves were hardly the classic green ones I had envisioned to represent nature, and they certainly did not fit with the theme of death and destruction. The pieces the ants painstakingly cut from these colorful leaves looked more like a Mark Rothko or a Jackson Pollock painting than food for a fungus garden. These little artworks could easily have hung on the walls of MoMA.

That’s when the lightbulb went off. Trash Colonize the Earth. The ants didn’t want to do it. Instead, shoot a video of them making art. If bowerbirds can construct elaborately adorned sculptures to impress a mate, is it beyond comprehension that leafcutter ants might appreciate the beauty of the very plants on which they depend?  Who knows? In any case, I respected the ants’ selection. They picked the plant for my video and I rearranged my ideas to accommodate them. In all honesty, their idea was better than mine and I thanked them profusely. I spun off War as its own piece and renamed the new video Antworks.  The leafcutters put on a masterful art exhibition.